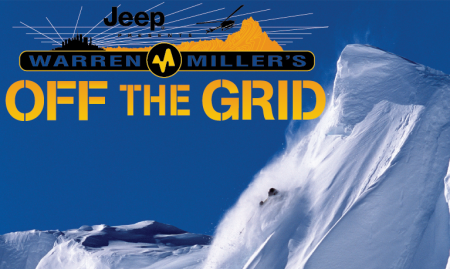 The bar has been raised and Warren Miller Entertainment’s 57th annual feature film is going Off the Grid.

Off the Grid delivers the fiercest line-up of adventurous skiers and riders in the deepest snow and steepest mountains featuring Jeremy Bloom, Pep Fujas, Jenn Berg, Jeremy Nobis, Simon Dumont, Lynsey Dyer, TJ Schiller and the Crist brothers, to name a few. Not without Warren Miller’s brand of humor, this year’s film runs the gamut of emotion as it circumvents our world, our grid.

Follow big-mountain superheroes to the un-skied faces of Kashmir, India. See incredibly deep powder skiing and riding in Utah, Colorado, and Montana. Find out what makes the terrain park skiing stuntmen tick at the U.S. Freeskiing Open. Marvel at the world’s gnarliest snowball fight and the quirky characters of Monpalooza. Discover the terrain-less-traveled in Austria, Switzerland and Canada. And learn why nothing is impossible on the impossible steeps of Alaska with adaptive skiers Monte Meier and Kevin Bramble. With a diverse soundtrack featuring Audioslave, Imogen Heap, Zero 7, Gomez and Primal Scream, Off the Grid is proof that when the snow falls, the rules change.

The snow is falling. The rules have changed. Winter starts now. So what are you waiting for? It’s time to get Off the Grid.