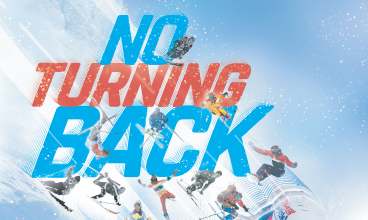 The moment begins when you load the first chair of the season and it builds all the way up the mountain. It crests as you straighten your goggles and push toward the start of your first run. A sharp inhale of winter air electrifies your system and, as you disappear over the edge, you know there’s No Turning Back.

For Warren Miller Entertainment’s 65th annual winter sports film, join Olympic champion Jonny Moseley in leaving any second thought behind like a cloud of cold smoke on a Montana powder day. Watch Seth Morrison lead a crew of veterans where even the young fear to tread in Chamonix, France. Chase Ted Ligety and Bode Miller down one of the World Cup’s most challenging downhill tracks. Join Ingrid Backstrom and a helicopter full of women redefining big mountain skiing in Alaska’s Chugach. And disappear under a bottomless blanket of snow with Seth Wescott and Rob Kingwill in Japan. From the Rockies to the Alps and back again, this is relentlessly progressive skiing and snowboarding that celebrates decades of big air, fresh tracks, and colorful personalities.

When Warren Miller first lugged a film camera into a blizzard in 1949 wearing nothing but a few layers of wool and a grin, people thought he was crazy. But in the years since, every skier and snowboarder following his tracks learns what Warren knew: It’s the ones who never experience the joy of winter and the thrill of the mountains who are really crazy. For the rest of us, when the leaves start to change, the air gets crisp, and the first dusting of white appears on the mountains, that means only one thing: There’s No Turning Back.