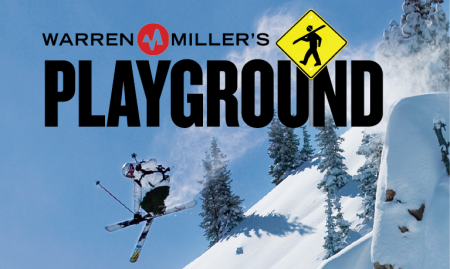 There's a place surrounded by an invisible line in the snow, across which day-to-day reality cannot go; where the rules and regulations of a world structured by parents and bosses, spouses and teachers fall to the ground and melt away like a snowball dropped onto a cleared sidewalk in the sun. In this place, fun and challenge are the only objectives; play and freedom are the only rules, so for our 58th feature film, Warren Miller Entertainment heads back to our stomping ground ... the Playground.

Here, swing sets, seesaws, and slides are replaced by towering peaks, chute-laced descents, and kickers so big only kids have the courage to try them. Experience the famed ranges of British Columbia, Utah, and Alaska through the eyes of big mountain riders who see fun where others only see fear. Join young athletes as they tackle the slopestyle competition at the U.S. Freeskiing Open like it was some kind of video game come to life, where the risks are worth the rewards. And meet the locals in places like Aspen, Colo., where an entire community dedicates itself to making a Playground out of a town.

From the sands of Dubai and mystique of Japan, to the frigid northern reaches of Sweden, Warren Miller Entertainment follows the leading skiers of the freeride movement - like Jon Olsson, Sean Petit, Dan Treadway, Peter Olenick and others - on a journey to a special place where anything is possible on the side of a snow-covered mountain. Because, for more than half a century, we've found skiers and snowboarders in every corner of the globe ... and we found them all in the same place ... the Playground.