A winding, two-lane highway skirts a river lined by majestic lodgepole pine as I make my way Northeast from Kamloops, British Columbia. After a beautiful two-and-a-half hour drive deep into the interior of the province, I arrive at the small, single-brewpub community of Blue River—home of Wiegele World, a skier's dream. At least it's this skier's dream. 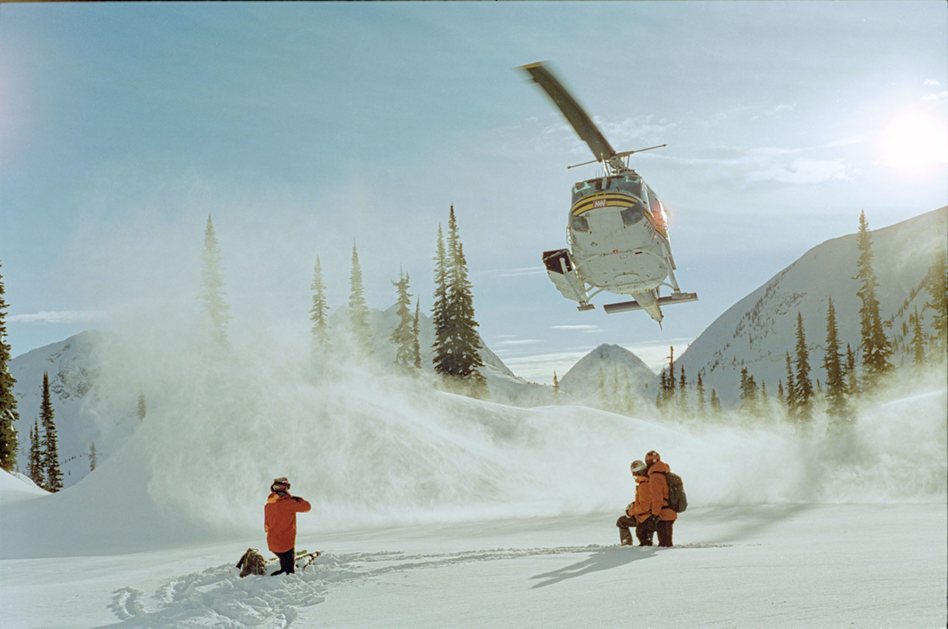 There are no other heli-skiing operations in the world quite like Mike Wiegele Heli-Skiing (MWHS). With 50 years of operation under its belt, this luxurious resort makes it its core mission to embrace the pure love for powder skiing that drove Austrian–born Mike Wiegele to start this operation in 1970.

As the story goes, after nearly 10 years of ski touring and exploring the Monashee and Cariboo mountain ranges in interior B.C., Wiegele took a chance at running his own helicopter guiding service. Garry Forman, helipilot and owner of Yellowhead Helicopters Ltd., would fly the helis and Wiegele would guide. But with no guests signing up for trips initially, Wiegele wrote to Warren Miller, extending an invite to come up and give his operation a go, free of charge, so long as Miller would include Wiegele’s fledgling operation in one of his films. Today, Wiegele laughs as he admit she wrote other filmmakers, but Warren was the only one to take advantage. “I just wanted people to come up here to ski,” he says. 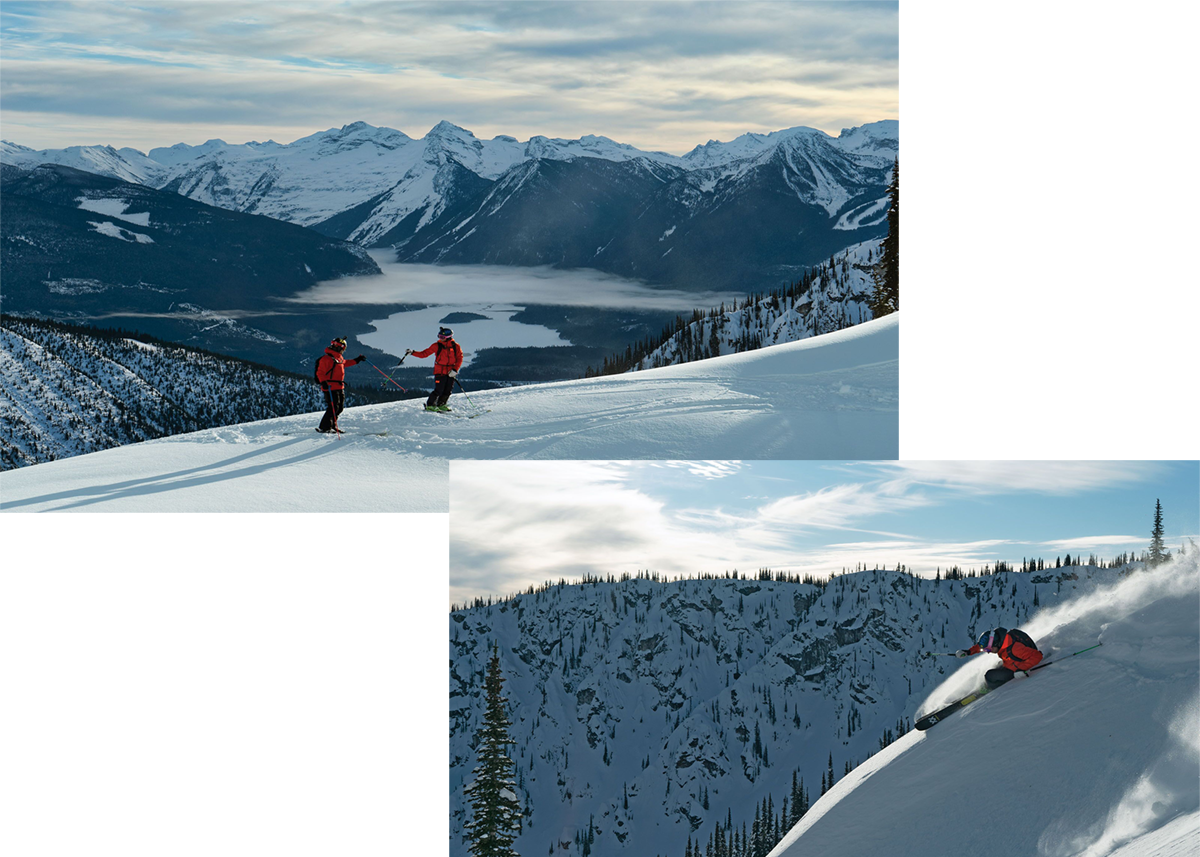 From left:
Ross and Ryan celebrate an epic run during some of the best weather of the trip.
Ryan goes deep during an early-morning run.
Photo credits: Josh Haskins
Fifty years and a whopping 26 Warren Miller film inclusions later, Wiegele World is considered a bucket list ski destination for people all over the world, and at 80 years old, Wiegele himself is still the key stake-holder, opting to attend all of the guide meetings that take place every single morning before skiing and every afternoon after skiing. With a unique approach to snow safety and having spearheaded and facilitated the creation of the Canadian Ski Guide Association in the late 1980s to help grow the field of educated and capable guides available in Canada, the Wiegele experience is as much about world-class guiding and snow safety as it is about world-class skiing. 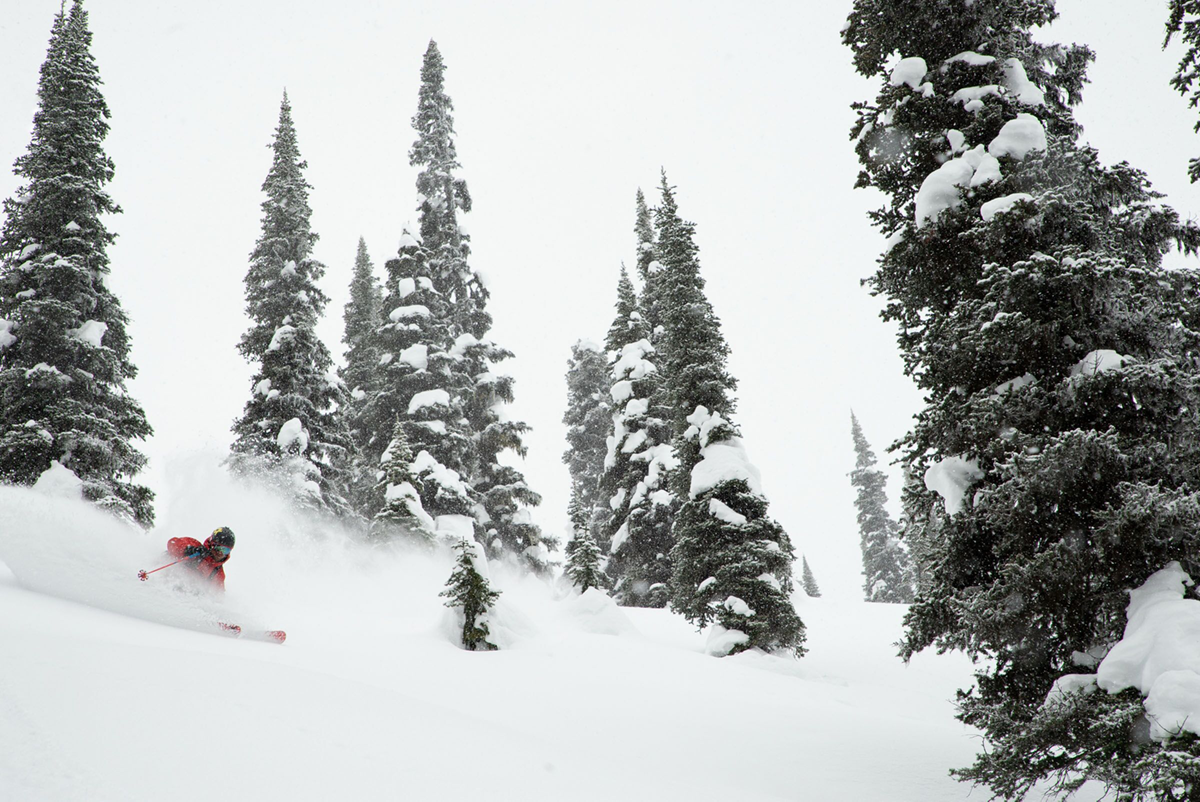 Ross gets schooled in the ways of Wiegele.
Photo credits: Josh Haskins
Wiegele’s “5 Step Checklist” for terrain risk management differs from other avalanche-forecasting methods. Wiegele factors in “Cosmic Solar Radiation” (CMR) as Step 2 in checking snow stability. While it has not been adopted across the entire ski industry, the idea is that “radiation enters the snowpack, melting tiny particles of snow and emitting water vapor in the process,” Wiegele describes. This step factors in humidity, temperature, and load into a graph with relation to tidal times and has been used by Wiegele and his guides since 1987.
“I’ve always looked for a sense of character and humility,” he says when asked what sort of person makes a strong guide. “Aggression is bad and so is ego.” 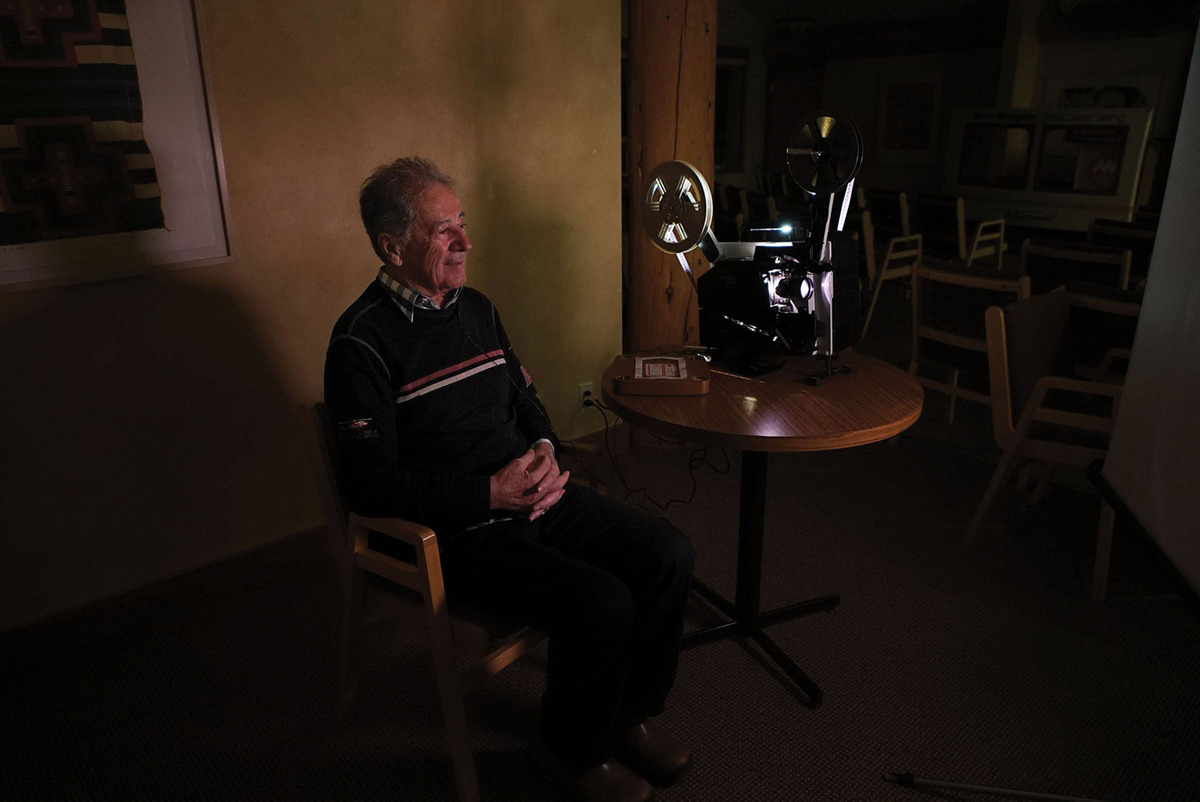 Mike Wiegele reminisces over old ski films during a quiet moment at his lodge. Mike and Warren were great friends and partners thorughout both of their careers.
Photo credits: Josh Haskins
With 43 years and counting, Senior Lead Heli-Ski Guide Erich Schadinger is the most-veteran guide on staff at Wiegele’s. Born in Canada to Austrian parents, Schadinger went to Austria for Mountaineering School in the early ’70s and found his way to Wiegele’s by 1978. At that time, there were a total of six guides. Today there are 35.
“How our boss has raised us and the facility, and how he’s passed on his mountain awareness and knowledge are all what make this operation unique,” says Schadinger, who answers the question while simultaneously completing his hour-long workout routine that he does every day—after a full day of guiding and skiing. “I like to be calmer and slower when I’m out with guests,” he says. “Things can happen really quick and so Ilike to give explanations.”
Schadinger, 64, guides every day of the season, which runs from December to the first week of April. He’s an admirable leader, whose quiet yet friendly approach has lent itself to mentorship for multiple guides who have come after him. One of those guides is Ryan Bush, a 26-year-old local from Kamloops. Bush is a prime example of the development efforts at the grassroots level that MWHS has invested in its local community.
At the age of 19, Bush completed his Level 1 certification through the Canadian Ski Guide Association. “When it was time to complete my Level 2, Mike told me he’d reimburse me a good portion of the course if I passed it,” Bush says. “And if I didn’t, I’d have to pay for it in full.” Luckily, he passed—and has been guiding at Wiegele’s for the last eight years.
“With this job, there isn’t a day I ever want to take off,” says Bush. Around 1,300 guests come to MWHS between December and early April, and if the weather allows, every day is a potential ski day.
White, jagged peaks draped with snow poke out of dispersed clouds and long, even-pitched cascading ski lines beg to be explored from every direction. Between the Monashees, the Cariboos, and a recently added Rocky Mountain tenure, there are 1.5 million acres of skiable terrain and over 1,000 named runs, such as “Warren’s Way” and “BooBoo Juice.” 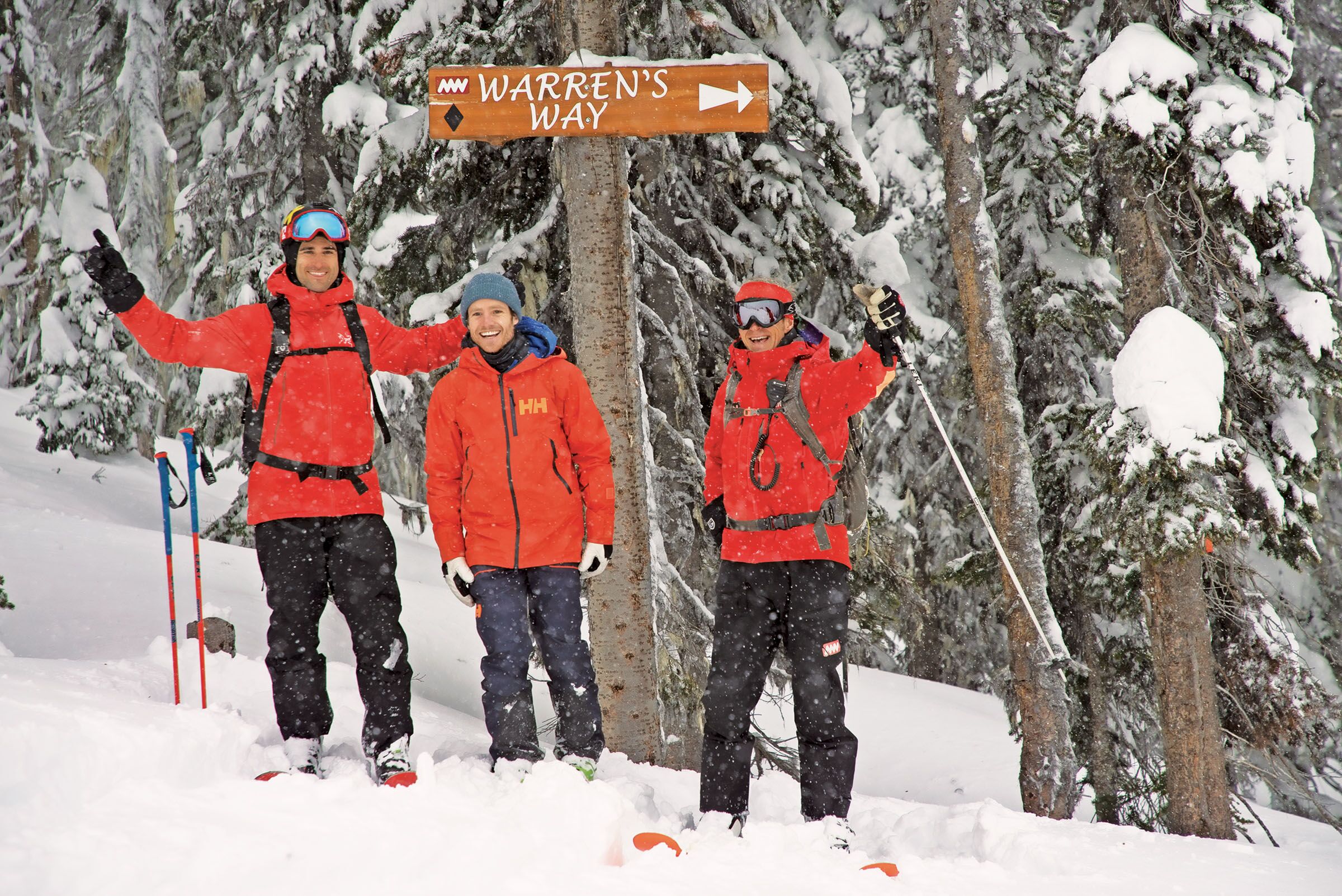 Ryan, Ross, and Rankin under the sign for the run Mike dedicated to Warren after the filmmaker's passing last winter.
Photo credits: Josh Haskins
Working hard comes easy when it feels like play. Case in point: 30-year veteran guide Bob Rankin. “It’s like the mice have been put in charge of the cheese,” he laughs. Like Wiegele’s wife Bonnie has said, people thought her husband was a little cuckoo. And he probably was, Rankin jokes when discussing the risks Wiegele took when starting this operation 50 years ago. “But you know, he’s built up this amazing place and I’m pretty happy he did.”

This article appeared in the 2019 Special Edition of SKI Magazine that all attendees of "Timeless" took home.