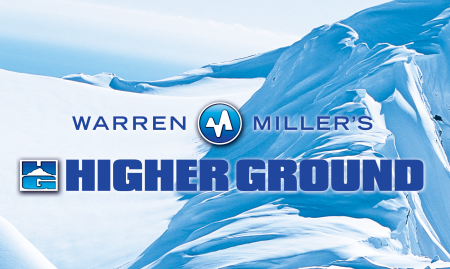 Warren Miller's Higher Ground chronicles a dedicated band of the world's most acclaimed winter sports athletes as they crisscross the globe in search of new and more thrilling ways to experience the ride. For extreme sports athlete Dave Barlia this meant flying 10 feet off the ground at 130 miles per hour, over the slopes of Chamonix. World cup mogul champion and Olympian Jeremy Bloom had a "life-changing experience" when he went heli-skiing for the first time in the wild backcountry of British Columbia.

Set against an adrenaline-pumping soundtrack, legendary athletes—such as big mountain skiers Jeremy Nobis and Seth Morrison, ski-base jumping innovator Shane McConkey, and the sport’s hot-dogging icon, Glen Plake—take us with them on their never-ending quest to reach higher ground.