Athletes and longtime ski buddies Amie Engerbretson and Lexi duPont rendezvous in Switzerland’s majestic Uri Alps for a raucous joyride through the high alpine complete with charming villages, kitschy souvenirs, and all the rösti and chocolate they can eat.

What's better than a girls' trip packed with souvenir shops, fondue, and indulging in delectable Swiss desserts? Um, please. Let’s dispense with the annoying stereotypes, shall we? When badass freeskiers Amie Engerbretson and Lexi duPont travel to the Swiss Alps, it’s to lay deep trenches into the seemingly endless pistes above Engelberg and to explore the couloirs and glaciers that are so abundant throughout this adventure playground.

Might there be a trip to the spa and the occasional (ok, daily) stop into the local chocolate shop? Damn right. The type of big-mountain skiing that’s called for when filming with Warren Miller Entertainment calls for a bit of pampering.

Returning for their third segment together in this year’s “Future Retro,” WME’s 71st feature film screening virtually this year, the dynamic duo rips big-mountain lines at the resorts of  Mürren and Engelberg. Bonus: The pair was joined by ski photography legend and Engelberg local Oskar Enander, checking off a bucket-list  item for Engerbretson. “It was like a dream come true,” she says, “where I finally got that classic bluebird day in Engelberg with Oskar.”

We’re just glad we get to enjoy some behind-the-scenes of one of "Future Retro's" most beautiful segments. Hats off to these fierce females who’ve earned the right to plow the pow—and eat their cake, too. 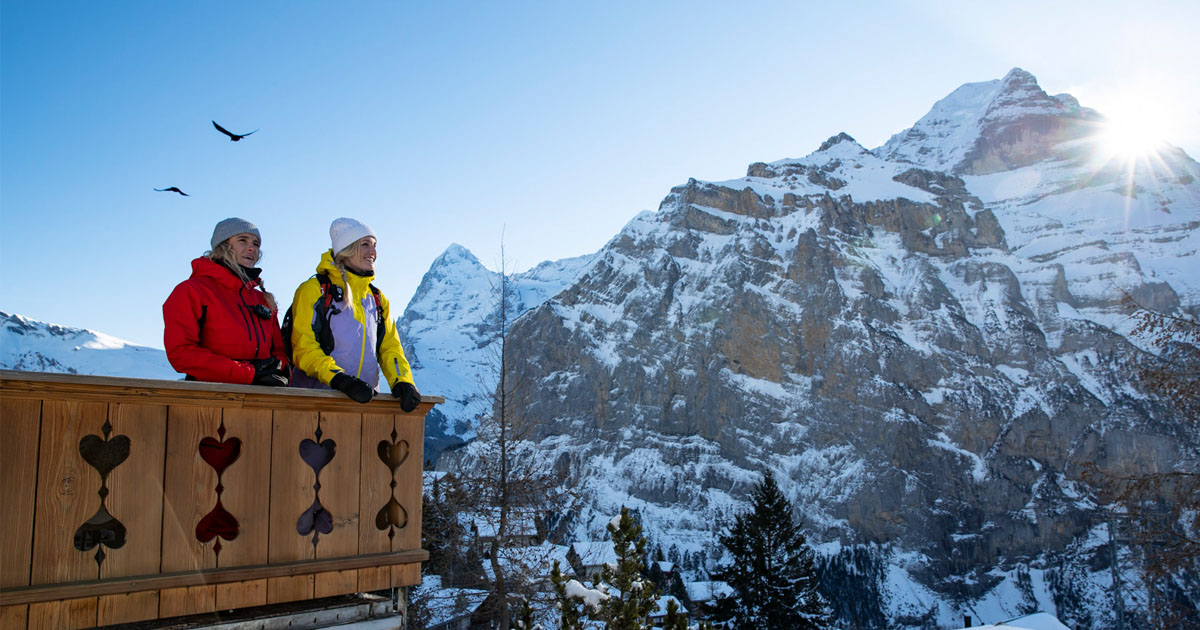 Getting around the Jungfrau region can be done easily via train and cable car, and some areas (like Mürren) are completely car-free. To reach the region, rail is the easiest option. From Zurich International Airport, take the train to Lucerne and on to Engelberg (the ride takes about two hours), or follow the motorway in the direction of Lucerne. To reach Mürren, take the train from Zurich to Lauterbrunnen, where you will take a cable car and train the rest of the way up. Don’t miss the Schilthorn in Mürren atop the Piz Gloria—a restaurant with 360-degree views of the Alps used in the 1969 James Bond film, "On Her Majesty's Secret Service."

“The secret to Switzerland dining is Rösti,” says Engerbretson, referring to the hashbrown-like concoction with Swiss cheese, diced ham or bacon, and a fried egg on top. “When I’m skiing in Switzerland, it’s all about the hunt for powder and the hunt for Rösti.” Enander suggests starting your morning with an espresso from Roastery Engelberg, then kicking back for après at Ski Lodge Engelberg at the end of the day. The Alpen Club is a traditional Swiss restaurant in Engelberg with cheese fondue, perfect for when you want to take your ski gear off and have a fancier dining experience. 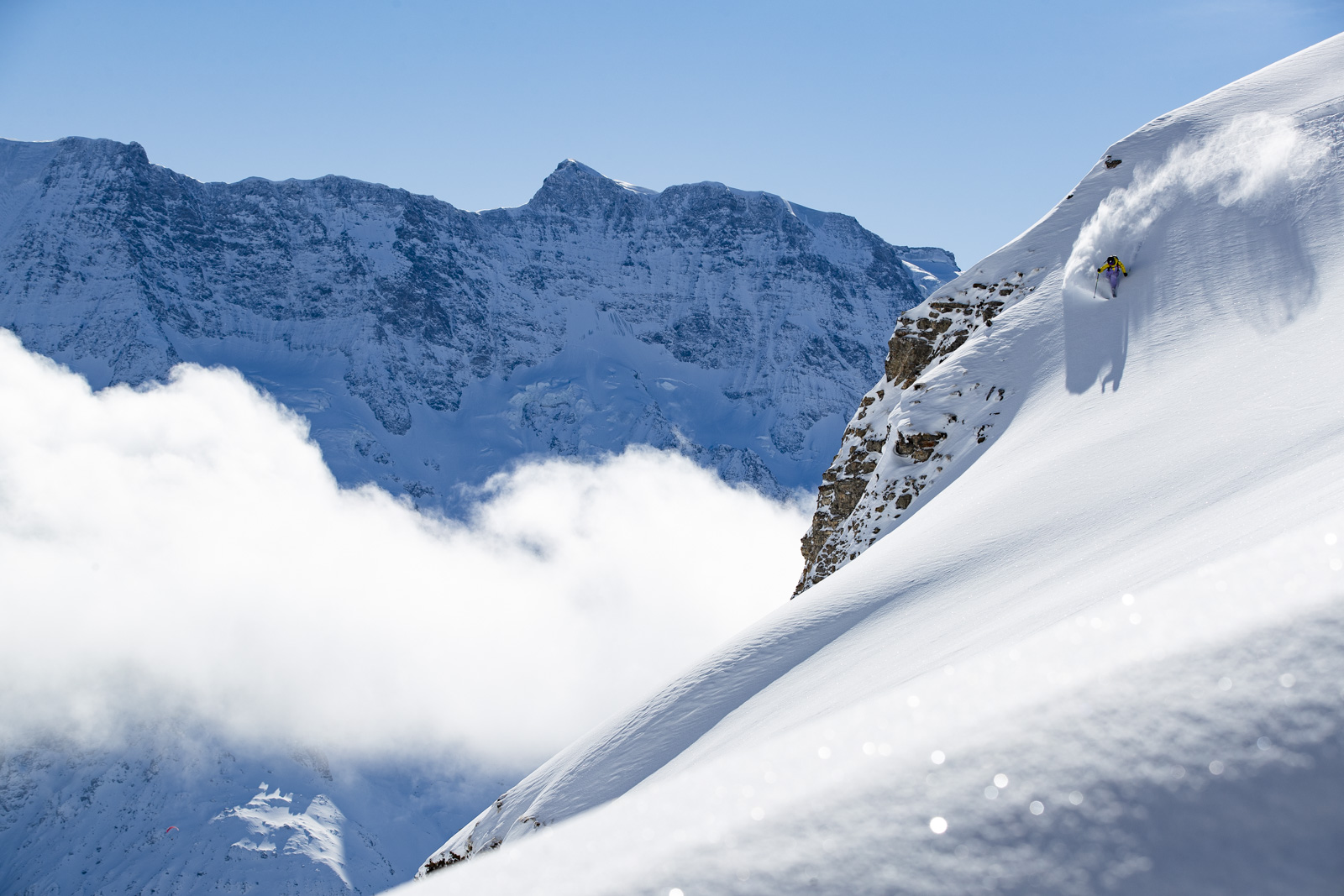 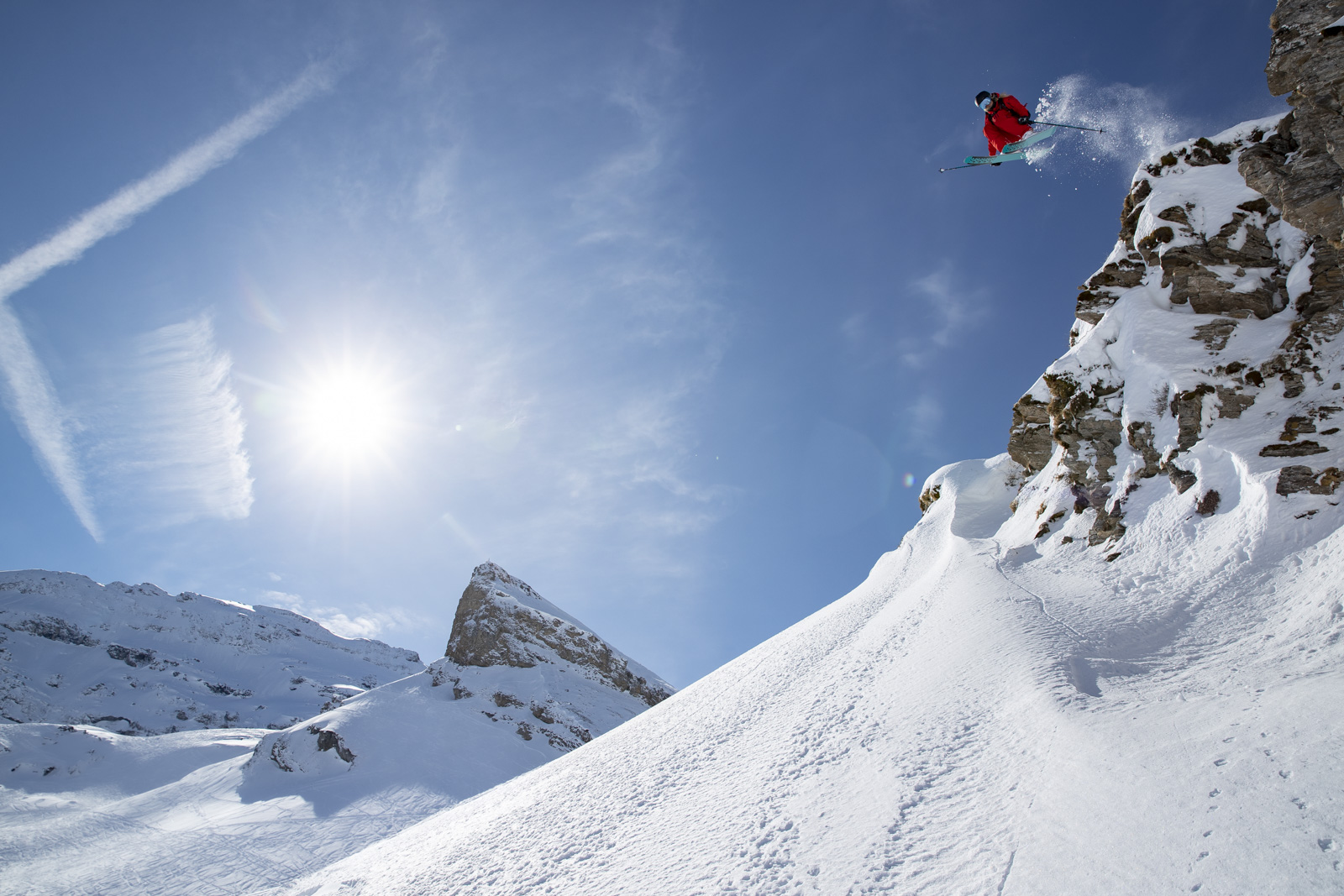 duPont scores some air in a large, lap-able freeride bowl in the middle of Engelberg. “It has the size and scale of the European alpine resort, but it has the skiability of a North American resort,” says Engerbretson. 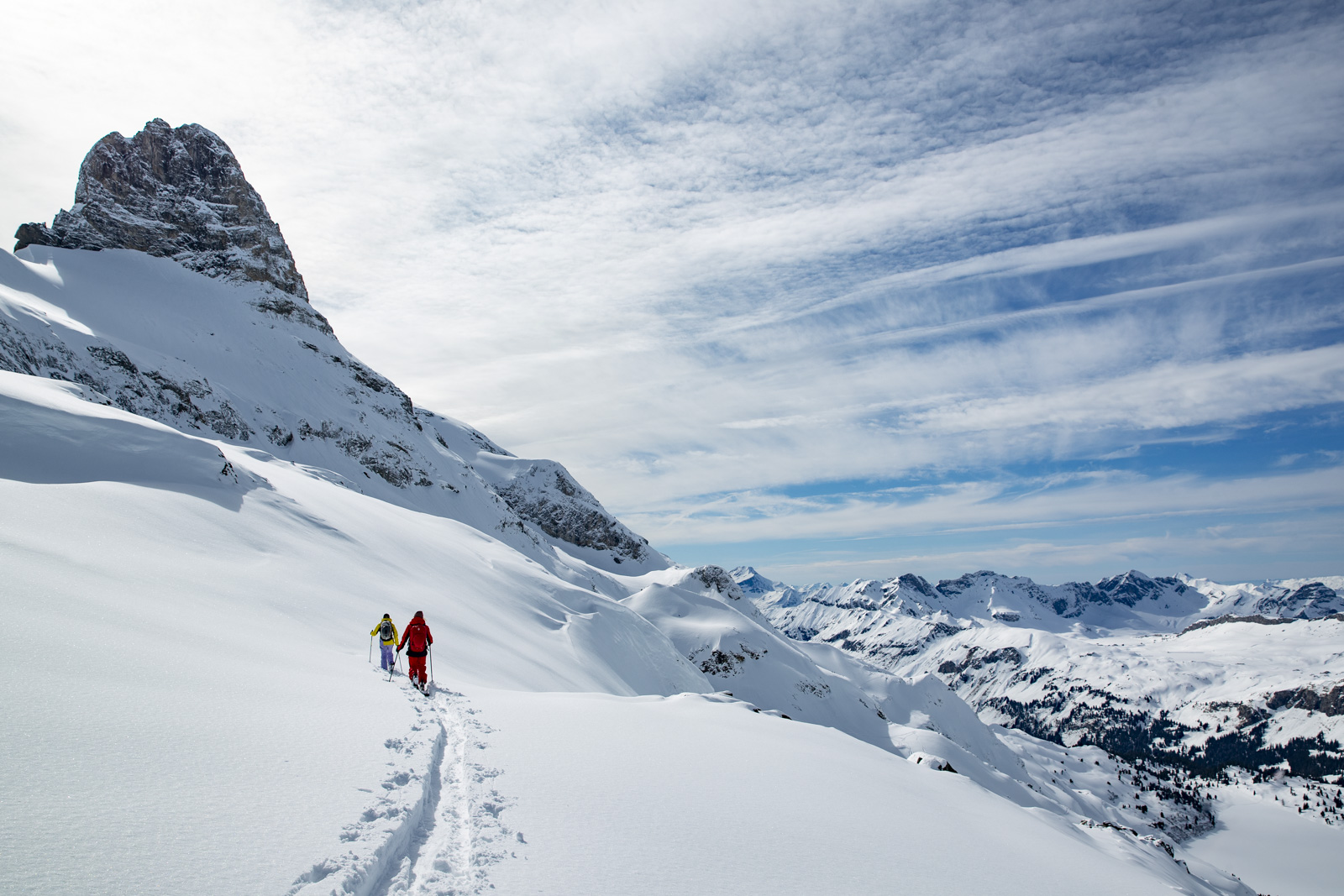 Engerbretson breaks trail to find what Enander calls the “roly polys”—undulations in the terrain that get stellar light. 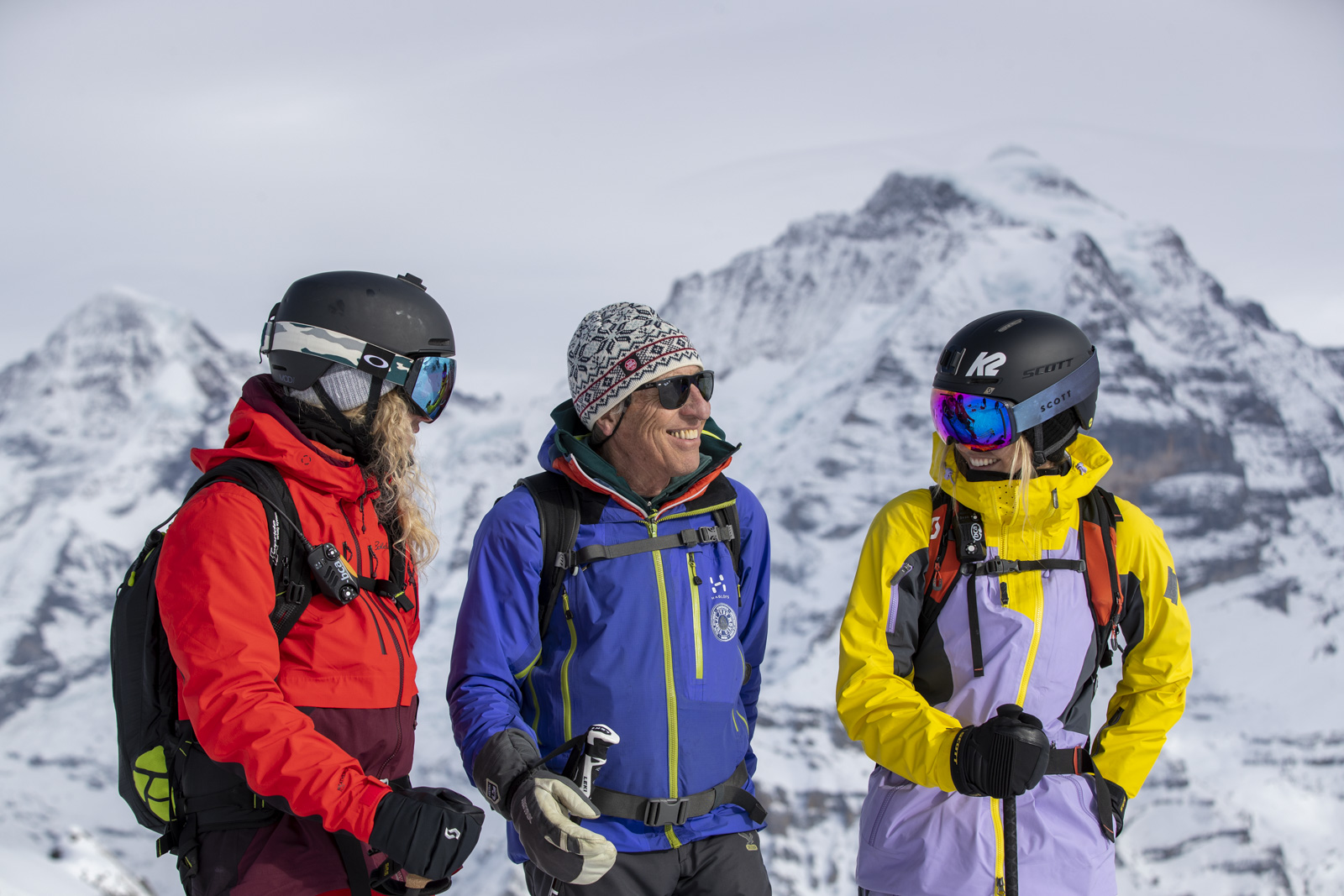 Engerbretson and duPont chat with Mürren guide Hannes Staehli during the first portion of their trip. 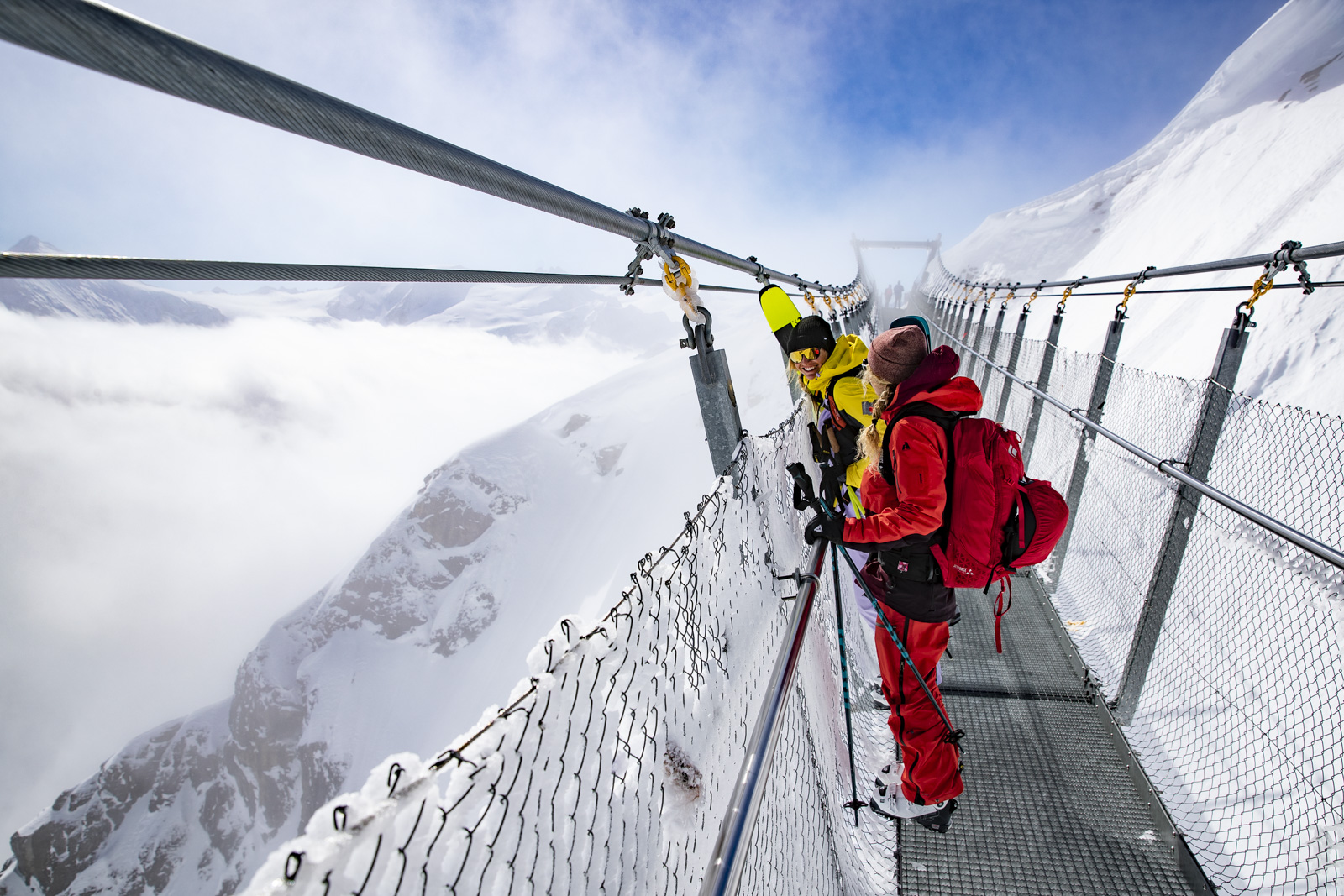 Engerbretson and duPont take a scenic stroll on the Titlis Cliff Walk—a suspension bridge that marks the highest point in Engelberg. It's accessible via the Titlis Rotair rotating cable car. 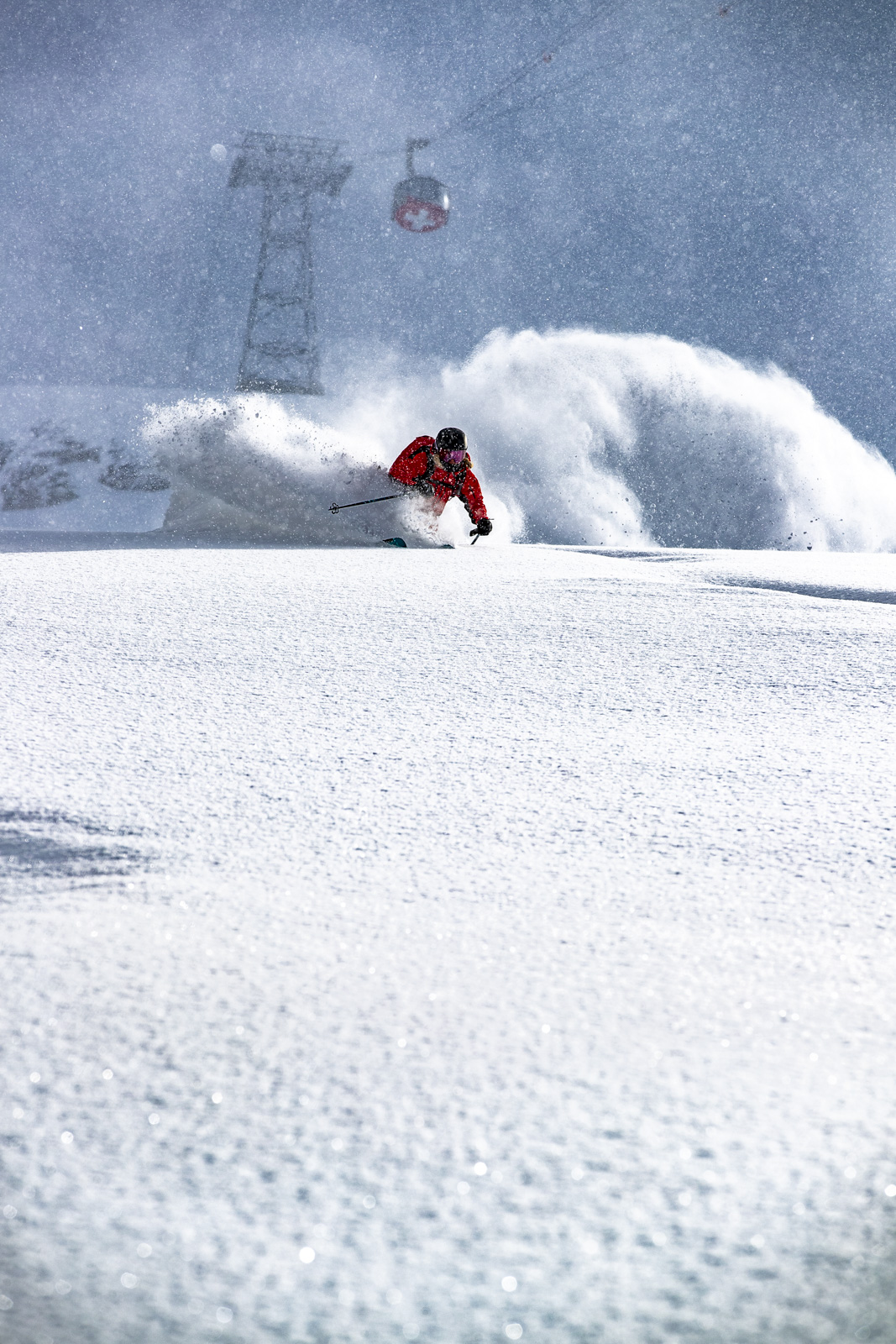 Freeriding and off-piste is popular in Engelberg, and very accessible. Here duPont skis a defined route beneath the tram. The late afternoon brought “beautiful light,” says Engerbretson. With such close backcountry access and unmaintained terrain, it’s common to see skiers with backcountry equipment even while skiing in the resort boundaries. “Everyone skis with a pack, beacon, and shovel, even if the tram goes right there,” says Enander. 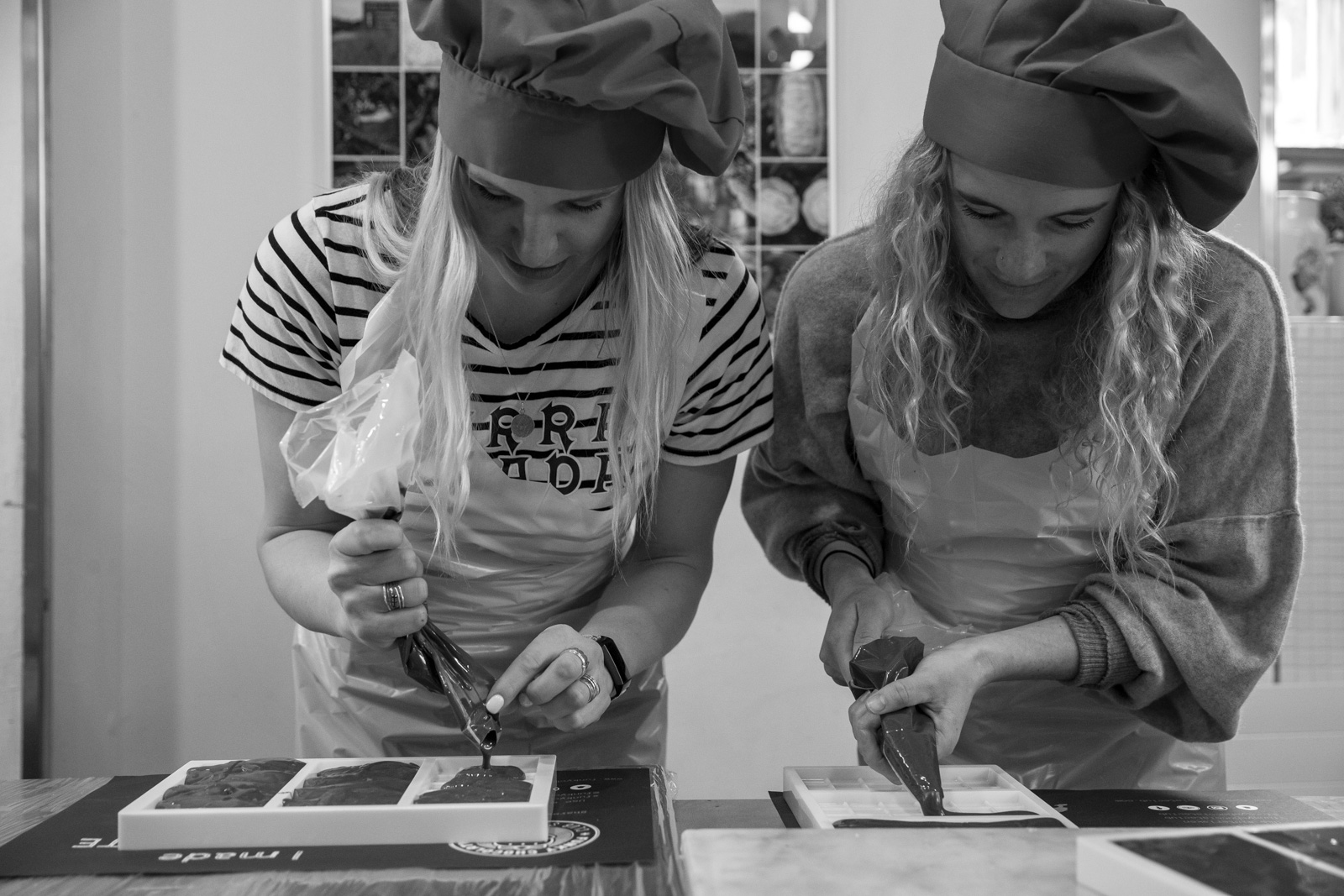 What’s Switzerland without chocolate? This shop in Engelberg had “unbelievable hot chocolate with Baileys, whipped cream, and sprinkles,” says Engerbretson. Both athletes spent time handcrafting delectable deserts and eating the goods. “We ate plenty of chocolate while we were there,” Engerbretson laughs. 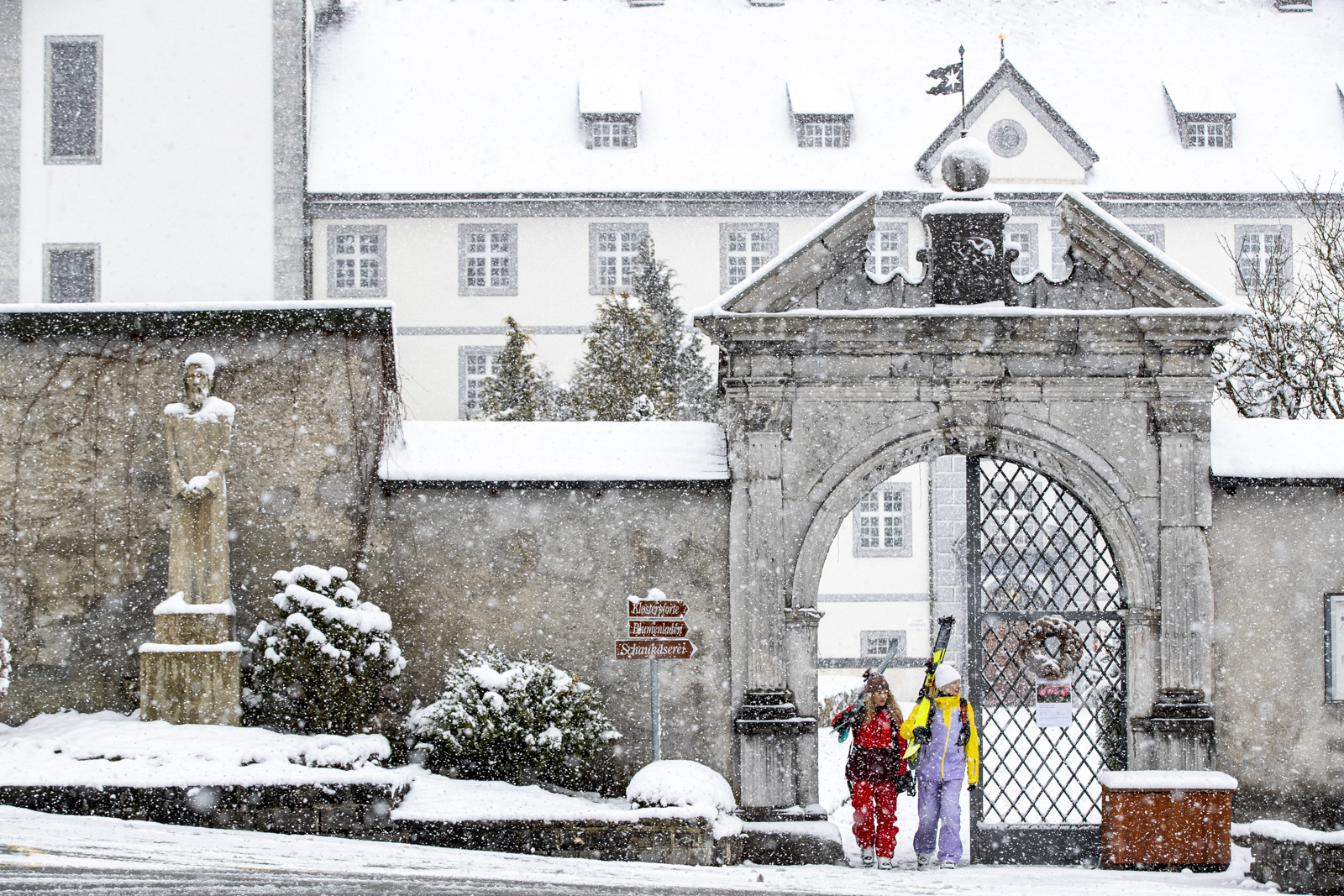 The charming, centuries' old town of Engelberg was formed around its medieval, still-operating monastery. The crew arrived and “it was dumping,” says Engerbretson. On the way to the slopes, the athletes would pass by the impressive old abbey in the center of town and wait for the ski bus to arrive.

This content was created in partnership with SKI Magazine.