Olympic gold medalist and cross-country superstar talks about struggling with body images, finding time for family, being brave, memories from ballet and that time she felt like Jack from the “Titanic”.

In the 8th and final episode of this season of “Long Underwear”, host Amie Engerbretson talks to cross-country skiing superstar and gold medalist, Jessie Diggins. Volkswagen presents “Face of Winter” was the first Warren Miller film to do a full segment on the US Cross Country Ski Team and after a record-breaking 2018 Winter Olympics in Pyeongchang, it was the year to do it. Along with her partner in the Team Sprint, Kikkan Randall, Jessie won the first gold medal the US Cross Country Team has ever won and credits the entire team for the victory.

Amie asked Jessie to give listeners who don’t follow cross-country skiing a rundown on the sport’s landscape and Jessie discusses what it was like to clock 76 kilometers (47 miles) per hour going downhill on a race track in cross country skis (which often have no metal edges). 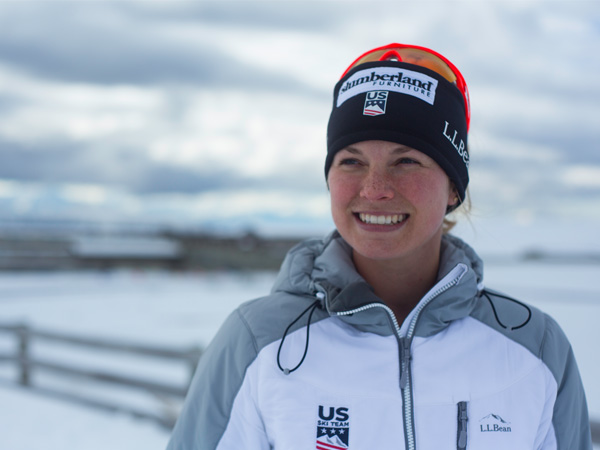 Jessie goes on to discusses what it means to grow the sport in the US, the news of bringing a World Cup to the US in March of 2020 (which will be the first in the US) and the struggle in balancing her personal and professional life. And, Jessie explains how much to the entire US Cross Country Team to be in a Warren Miller film, having only alpine skied about 10 times in her own life (crazy to think about, we know!).

Once the no s-word is enforced, and Amie asks Jessie about how she spends her down days, whether it be back home in Minnesota with family, or our east where she lives now. Then Amie inquiries about Jessie’s blog, and specifically about a post involving Jessie’s struggle with body image issues—not as a professional racer, but as a regular person. Jessie describes some of the struggles she’s faced personally and encourages others to broaden the conversation around body image from just teenage girls to include people from every age, gender and walk of life.

After this, Jessie talks about what her life would look like if she lived in an alternate reality in which she was not a professional skier (clue: it involves ballet). Then, the two discuss when Jessie’s house was flooded a month out from the Olympics, having the opportunity to advocate for good via her platform, and finding her person. To wrap it all up, Jessie tells a story from her childhood involving her eagerness to prove her bravery, a summer lake house in Canada, an expedition in a canoe that almost ended with her playing Jack in the “Titanic”.

Did you enjoy this episode? Subscribe to our email list to receive Long Underwear updates, stories, film news and more!
← Previous
Redeem Coupons