The pros and cons of Midwest to west coast living, loving other peoples’ successes, pet peeves, compassion and Broadway show tunes as her life’s soundtrack.

For episode #4 of Long Underwear, host Amie sits down with former Olympian and big mountain skier Kaylin Richardson. The two discuss Kaylin’s experience filming with Warren Miller Entertainment in Rossland, British Columbia at RED Mountain Resort. Kaylin paints RED Mountain as a lesser-known but equally badass stop along Canada’s Powder Highway that she now considers on her list of Top 3 best places for steep tree skiing. Kaylin says this is her 8th Warren Miller film, and the two discuss what her favorite shoots over the years have been and what it means to go “skiing for yourself” as a professional athlete. 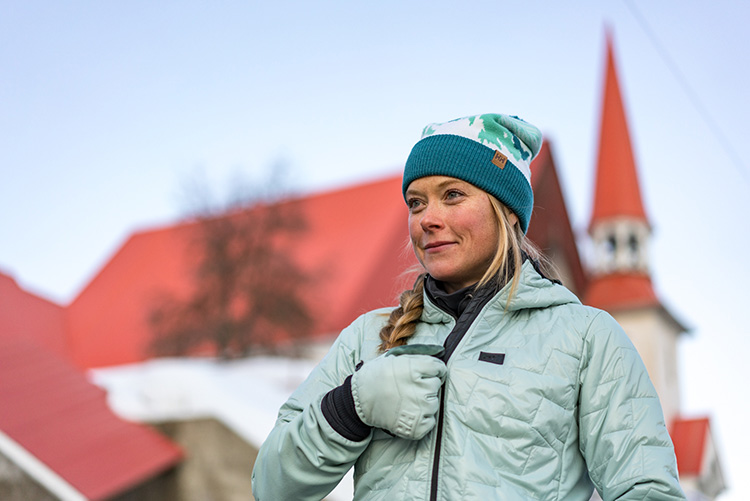 Once the no s-word rule is enforced, Amie asks Kaylin how she compares her childhood in the Midwest to her lifestyle out west and Kaylin speaks to the pros and cons of each, as well as her newfound appreciation for being called “ma’am” and what it’s like to be a big kid as an aunt.

From here, Amie questions Kaylin about her buzzing personality and if Kaylin has a secret for staying so positive. Kaylin reflects on a Yiddish word she learned from a dear friend nearly a decade ago called “fargin”, which means “finding joy in other peoples’ success.” She explains that there’s enough success for everyone.

Kaylin then goes on to talk about her dirty sense of humor and then gets serious about her pet peeves surrounding gender, race and privilege and what it could mean if people from every walk of life exemplified compassion. She explains what her ideal superpower would be and quickly tells Amie about her dreams of riding polar bears amongst Aurora Borealis because of a children’s book she used to love.

To wrap up, Amie challenges Kaylin to give her two highs and a low from the day before and Kaylin tells Amie about a magical trail run, one unforgettable hug and a glimpse into Kaylin’s (and Amie’s) obsession with musicals.

You can keep up with Kaylin’s adventure here.