Summer officially begins on Friday, June 21st, but it seems as though some mountains across the Western U.S. missed the memo, because snowpack totals are higher than average, and the 2018/19 ski season keeps refusing to end.

A rare species, the North American Summer Skier, has shed its heavy winter layers and is emerging to the slushy slopes, fully clad in vintage 80's ski apparel and bucket hats. Dubbed by some as the “winter that kept on giving,” this past ski season will be remembered as a solid snow year.

According to OpenSnow, the regular 2018/19 season wrapped up in April with many resorts across the U.S. reporting a higher than average snowpack and numerous powder days on record. Fortunately for the diehards, the skiing didn’t end there. We pushed through April and into May with high hopes for more snow to come. We even shot a Silverton, Colorado segment for this next year’s film well into spring. One Crested Butte crusty local was overheard outside Teocalli Tamale during the restaurants 2-for-1 margarita offseason special claiming that “back in the day, we would get 6-feet in April alone. My season is just beginning, hombre.”

As doubtful as we were—just a bunch of naive youngins’—Ullr delivered. From the Rockies to the Sierra Nevada’s, spring felt less like mud season and more like powder season. Mammoth reported it’s snowiest May on record, with 32” of snowfall. Squaw wrapped up the month with 35”, and California as a whole reported a season-to-date snowpack average of 216% on June 3. Out in Colorado, May snowfall and a chillier than average spring prolonged snowmelt, resulting in ‘off the charts’ statewide season-to-date snowpack levels. On June 17, SNOTEL reported Colorado’s snowpack at 761% above average. 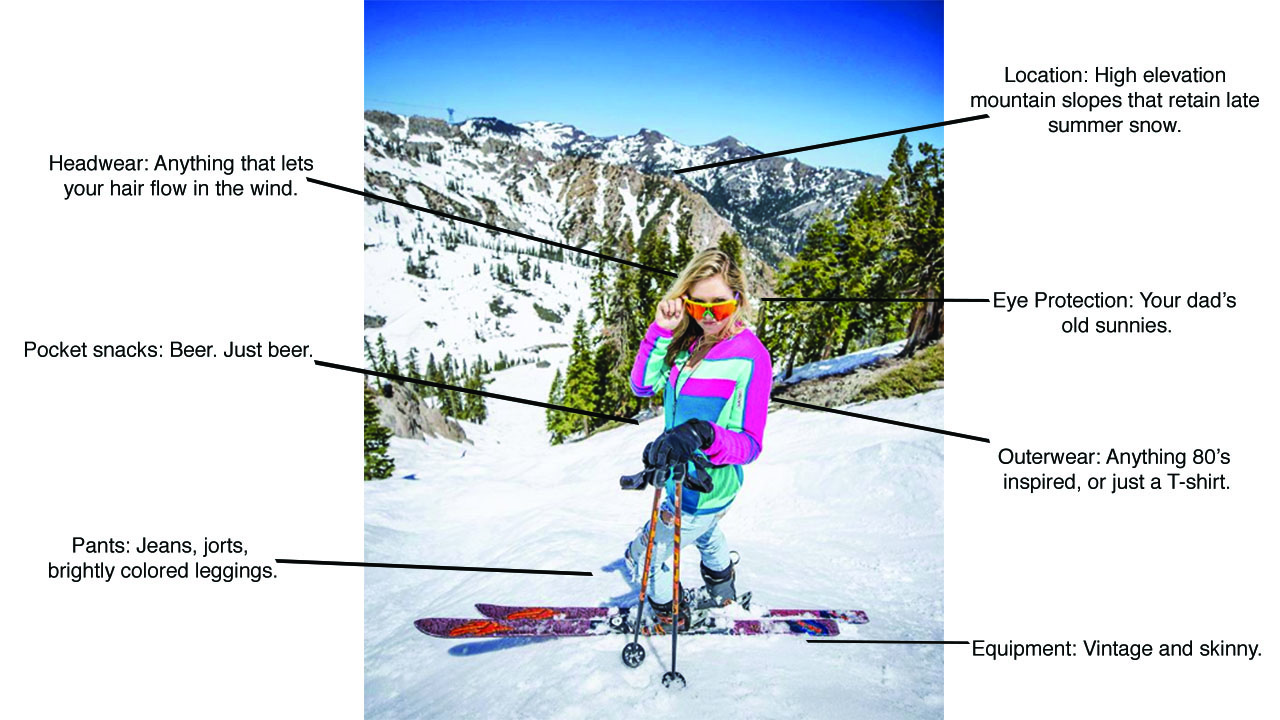 The combination of a snowy winter, May storms, and cold late spring temps may not sound appealing to everyone, but it does lay the breeding ground for the rare North American Summer Skier. A precarious species, the Summer Skier is often observed sporting Pit Vipers and pocket beers in its natural environment: high elevation mountain slopes that retain an acceptable snowpack into late summer.

Unfortunately, not everyone is adept to the summer skiing lifestyle. Some fun-crushers choose to kill the vibe with an “I’m so over it,” attitude and hang up their gear come April. One young Frontranger dressed in a neon pink vintage onzie at A-Basin last week claimed that her boyfriend fell victim to the lame-o mentality. “Yeah, he said he’d rather go mountain biking.”

But summer skiers are persistent and will continue to shred whatever snow they can sniff out, even if skins, tech bindings and AT skis are their only uphill transport. Luckily for them, prime spring snow conditions this year persuaded many resorts across the West to prolong their seasons. Breckenridge pushed closing day until June 9. Aspen Mountain reopened its gondola on June 15-16, making it one of the longest seasons in Aspen history. Squaw decided in March to stay open through July 7, promising an epic 4th of July celebration.

Arapahoe Basin, which hosts the longest season in Colorado, extended the season twice, settling on a June 23rd closing day. (UPDATE: A-Basin closing day was July 4th!) The ski area’s blogger extraordinaire / COO Alan Henceroth shared the above images of a year to year comparison of the mountain on June 9. He wrote this week, “We just had another weekend of great skiing. People are loving all of the great coverage on the upper mountain. I love this time of year.” And we love you, Al. We’ll be lapping the Lenawee Lift until you kick us off.

But even as the Colorado season eventually comes to a sorrowful halt next weekend, a handful of other resorts remain open across the West. Summer skiers can continue their migration West to these U.S. mountains that are still spinning lifts this summer:

The season isn’t over yet, people. Whether you’re a resort skier, a backcountry devotee or even just an armature slush addict, we encourage you to get out and get after it. Strap on your bucket hats, stuff those pocket beers and go forth and conquer the summer.