I Miss Bumps and Disco

After a month of Corona induced isolation my yearnings are solidifying. Where there was once a haze of ambiguous longings, I now find hardened and identifiable cravings. Sure, I miss economic stability, travel and restaurants. But I also miss bumps and disco.

It’s April, in my opinion the best month to be a skier in North America. There’s plenty of snow but sunshine is also found in degrees not seen since summer. It's the best of both worlds, the only month skiers don’t fantasize about being surfers. In Jackson Hole it’s the last hurrah—everyone skis everyday because this is it. This is (or was before COVID-19) the last chance to ride lifts until the return of hard and narrow November.

It’s a time for exploration, long traverses, new huts, and long days. The rush is off, the sun warms our bodies long after the lifts stop spinning. The hurry to find cover before the cold nightfall is postponed. We ski and then we linger. Those who arrive before the thaw linger and then ski. Some forget skiing altogether. New friendships are made on the general store deck at 3pm as crews never seen before assemble to catch one of the last trams of the day.

And the skiing itself? Superb. What a wonderful and unifying thing moguls are: the more you ski them, the better they get. For most skids, bumps promote more virtue than the Bible. Bumps will make an honest man out of the guarded powder protector. There's no such thing as a secret stash of bumps. Nobody's ever heard of a private wiggle. Time to shred with thy neighbor.

In what other conditions can you routinely find groups of 10 or more people skiing together? Pow day? No way. Spring is the season of the super crew, groups of people who ski the same mountain nearly every day but have never ridden a lift together finally unite. The pace gets a bit slower (our legs could use a break anyway) and a vibe gets a lot more social. “Fast friends” takes on a whole new meaning. Even the act of skiing becomes communicative as new friends show each other new zones and new ways to ski them. 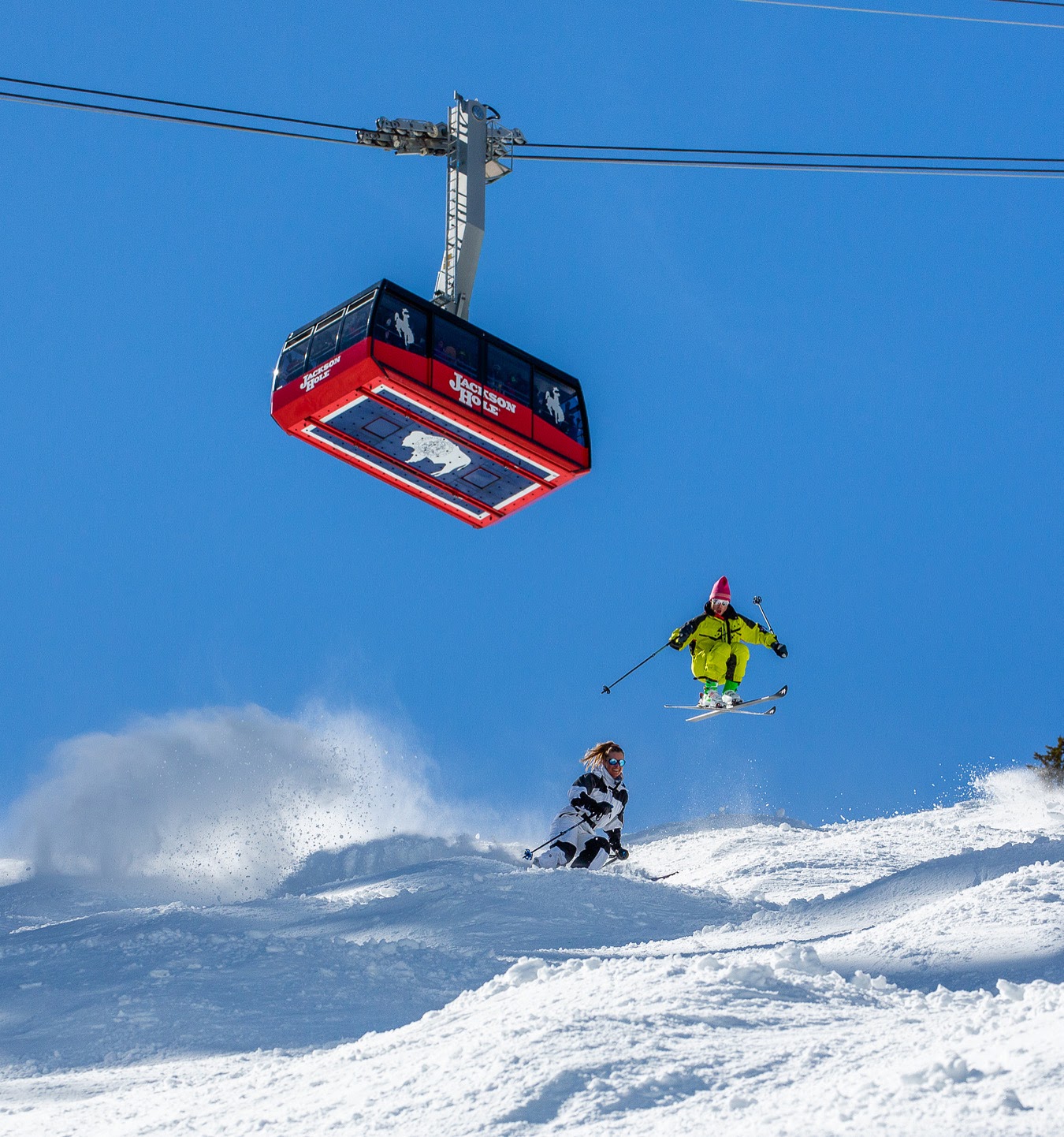 The author launches beneath the Jackson Hole Mountain Resort tram while skiing moguls earlier in the 2019-2020 season. Photo courtesy of JHMR and Eric Seymour

Bumps and sunshine strengthen the legs as well as the community. Even romance blossoms. Two people who have passed each other all winter finally see the other's face—and are intrigued.

The morning panic on a midwinter powder day can be more than a little stress inducing. Bumps, on the other hand, encourage serenity, a full night's sleep, and a proper breakfast. The later you show, the better the snow.

The only downside to a noon start is that sometimes the lifts stop spinning before you've had your fill. By April, you’ve spent the whole season getting in shape and 4 hours isn't quite enough to wear you out.

It should seem fitting bumps and wiggles be paired with disco, if based on nothing other than nomenclature. But the pairing goes far beyond name—whatever I discover about disco, I know to be true about spring skiing and vice versa. Both are a celebration of the moment, both aren't afraid to get funky, and both require A LOT of hip and knee mobility—rhythm is key, style a must.

And so we find ourselves in mid April, waking puffy eyed and sunburnt, slowly assembling the ski outfit we only remove to sleep. It is in April we realize we are the luckiest people in the world.

Corona robbed us of long days at the Vill when we could reside in the contented knowledge that we are exactly where we should be.  I won't tell you that I have found this same joy at home—I haven't. But what I have found is the specific knowledge that when everything social is taken away, disco and bumps are what I miss most—and as a result, I vow never to take either for granted again.

Jimmi Ryan is a pro skier living in Jackson Hole. He's been in Warren Miller films and you can learn more about him here.

Ski Tips & Wise Cracks: How To Stay in Aprés Ski Shape This Summer