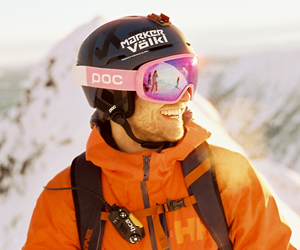 Name a person who inspires you to be a better skier/rider?

In lieu of our 70th film, what’s your most memorable or favorite Warren Miller film or segment – past or present?

There is a segment featuring a high schooler named Rebel in the 1964 film "The Skiers"--kid had killer flow, surely one of the pioneers of the micro-tranny. It's not about what you ski, it's about how you ski it. Style is paramount.

What would you do if you won the lottery?

Best meal you can cook?

It's not about what, more about when. I'm pretty good at packing a sandwich for a time of extreme need. Hunger is the best sauce.

Favorite chairlift and why?

Thunder Lift, Jackson Hole. The Hollywood Lap goes right underneath it. First, you get a show, then you give a show. Catwalking baby.

Sapiens by Yuval Noah Harari. That book really encouraged my more animalistic tendencies. Less footwear (or just wear in general), more frolicking. That wasn't his point, but that's what I got.

Fictitious character you most identify with from a book, movie, etc. and why?

Neal Cassady. Well, I guess his fictitious name was Dean Moriarty. Guy was pumped on life and was always part of the scene (because he WAS the scene).

Highlight memory from filming with WME for this year's film?

Austin and I got to ski this mega couloir at Mike Wiegeles; it was long, fast, skinny and steep. We both dropped in at almost the same time, so it was a totally shared experience. That's what its all about, getting rad with a buddy. Mind Melding.

Gear you are loving right now, on or off the ski slopes, and why?

I am super into my Volkl Mantra V. Werks right now, I've never had a super light ski before, my hip flexors are so so thankful. Shedding a little weight can make a huge difference on a long approach.

What is a cause you care about that you'd love to share with the Warren Miller audience?

Local Food Rescue! I'm just learning how much food gets tossed out of supermarkets every day, most cities have a local food rescue program that redistributes food unfit for shelves to those in need. Jackson's program is called Hole Food Rescue and I love them (it helps that they provide me with many a treat).

Do you have any sponsors, if yes, who?