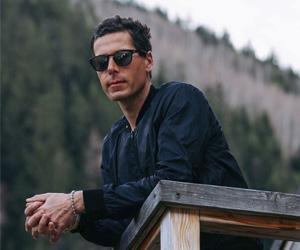 Current favorite piece/pieces of gear? Why?
The Atris skis by Black Crows. I can take them anywhere and I know I'll be able to shred whether the snow is awesome or really bad. And I like to wear the Black Crows Corpus jacket and pants, it's a 3-layer Gore Tex outfit with a big mountain touch, but it also works for touring and summits, it looks like a parka , I pretty much wear it all winter.

What’s your “Back in my day, we…”?
... we could handle skiing all day every day, sometimes in exotic locations, and then party at night where things would sometimes get intense and exotic as well!

Who has inspired your skiing the most?
It's not really a specific person, even though I had "ski heroes" when I was younger, but when I reached my 20s, what motivated me the most was the whole discovery and travel side of skiing. Reaching new peaks, discovering new lines... Skiing's the best excuse to try and lead as free a life as possible.

Ideal down day?
I can think of a few options, but nowadays, it would probably be watching a Korean movie in a small theater in the Latin quarter in Paris, then have a coffee on a terrasse.

Favorite on-mountain fuel/snack?
Well, I'm french, and I come from the mountains, so without any hesitation: saucisson, cheese and bread. In the sun please.

Spiciest/most intimidating line you've skied or ridden this year?
Nowadays and for the past ten years, ever since I launched Black Crows, I spend the better part of my days behind a computer. I have less time to ski but as soon as I get a window I get out there, I need it so bad, it's my whole life, but I'm also a mere office guy, as they say...This winter for the Warren Miller shoot, the most intense moment was probably when we were on the North Face of the Aiguille du Midi. The light was really poor and we had to wait close to an hour on the face to try and see the terrain. The light never came, but we had to go ahead and ski down regardless. I hadn't skied the North face all winter and it was actually almost pleasant...

Goals in skiing/riding this next year?
I'm planning on going back to the Himalayas for a high altitude expedition. I haven't been back in years because my schedule is too heavy but I definitely want to head there and experience these unique times again.

What’s a great book you’ve read recently?
It's a book called "Le Lambeau" by Philippe Lançon, a french journalist. It's a tough read, really intense. It tells the story of a journalist who comes back from the dead after being killed in the Charlie Hebdo massacre (terrorist attacks in January 2015 against french journalists). It talks of his pain and his metamorphosis. It's really well written. A great book on life.

Favorite mountain range?
Every morning, when I wake up in my hometown of Chamonix, I look out the window and I see the Aiguilles of Chamonix and the Mont Blanc Massif and I never get bored. They look intense and different every day, it's been like that since I'm a child!

Working title for the book or movie about your life?
The Metamorphosis

Best moment filming with WME this year?
There were so many good times but the best was probably to shoot for something as iconic as a Warren Willer production alongside my long-time friends Michael Schaffer and Bruno Compagnet, whom I co-founded Black Crows with. We've been friends for over 20 years and we skied together way before Black Crows existed, so being able to shoot together just adds another cool page to our story.

How did Warren Miller the man influence your skiing/riding career?
As a teen in France, it was really hard to get our hands any American ski movies, but I have flashbacks from old Warren Miller VHS where skiing seemed so gnarly and exciting! My ski club buddies and I would come across a movie and we'd head straight to the mountain to try just about anything! Those movies lead the way to skiing heaven!