Heli-skiing put Iceland on skiers’ radars. The island country has Arctic Heli-Ski founder Joküll Bergmann to thank for that.

It wasn’t too long ago that Iceland, an island rich in history and natural beauty, remained largely unexplored by the rest of the world. Then heli-skiing put it on every skier’s radar, bringing an influx of adventure-minded tourists and the beginning of an economic boom to the country. This significant pivot point in Iceland’s trajectory can be traced to one man: Jökull Bergmann, founder of Arctic Heli Ski, Iceland’s first heli-skiing operation. An Iceland native who grew up on the Troll Peninsula in northern Iceland, Bergmann recognized his 1000-plus-year-old family farm for what it was: a deteriorating working farm, but perhaps an ideal heli-skiing basecamp.

Tracing heli-skiing’s history and boom in Iceland means tracing Bergmann’s own history, one that goes back to the first settlement of Iceland, as well as a few Warren Miller Entertainment flybys along the way.

The Troll Peninsula in northern Iceland is a mountainous region known for its historic villages and sheep farms first settled by Norwegians around 850 AD. “Because the history of Iceland was documented right from the get-go in the Icelandic Sagas, we know pretty well who came from where in Norway,” Bergmann explains. “I know, for example, that I am the 31st generation direct descendant of Iceland’s first settler. My family has been farming sheep in the region of the Troll Peninsula for dozens of generations.” But the Troll Peninsula is not ideal farming land, explains Bergmann. “Our farm, Raven Hill Lodge, is the innermost and highest farm in the valley at 200m above sea level. That sounds like nothing, but at 66 degrees north, 200m above sea level is like 2,500m in central Europe in terms of the growing season,” says Bergmann. “It was a tough life.”

1991: Mountaineering and ski touring on the Troll Peninsula starts taking off 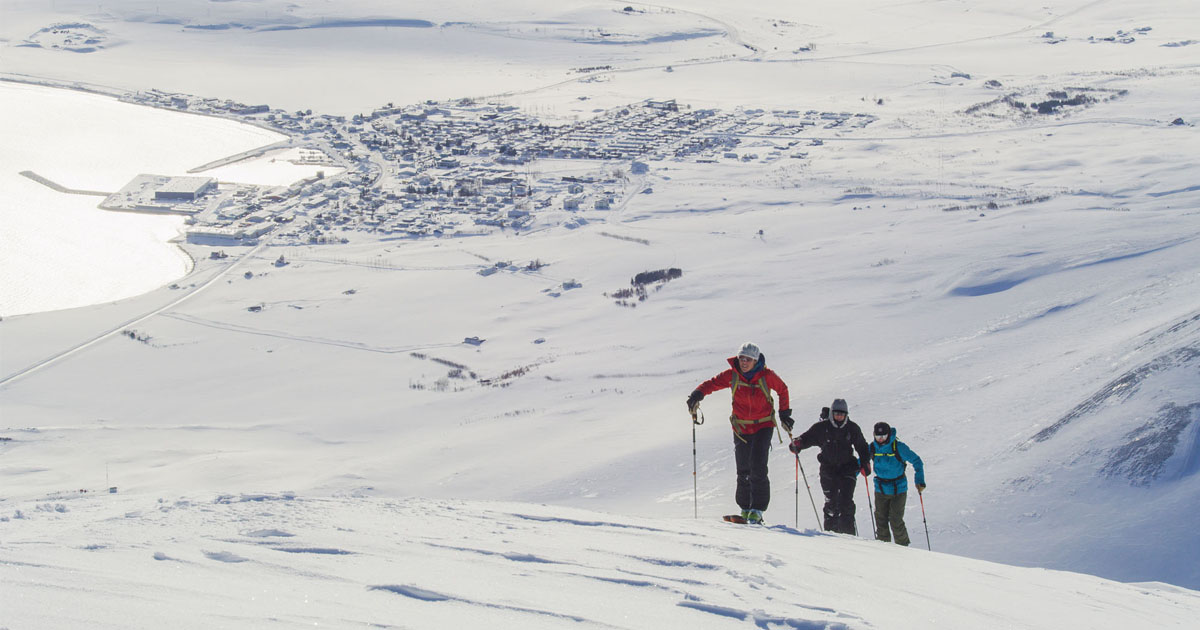 Bergmann, an avid outdoorsman and ice climber, becomes interested in pursuing a career in mountain guiding. “I spent several season in the Alps climbing and mountaineering,” he explains. “I was mostly climbing and skiing out of Chamonix at the time, but always coming back to Iceland to guide hiking and trekking.” Primarily a climber at the time, Bergmann begins to see the potential for skiing as a business venture on the Troll Peninsula. “I knew that I had incredible opportunities waiting for me around skiing in Iceland, and I knew nobody would ever make a living from rock climbing or mountaineering in Iceland.” 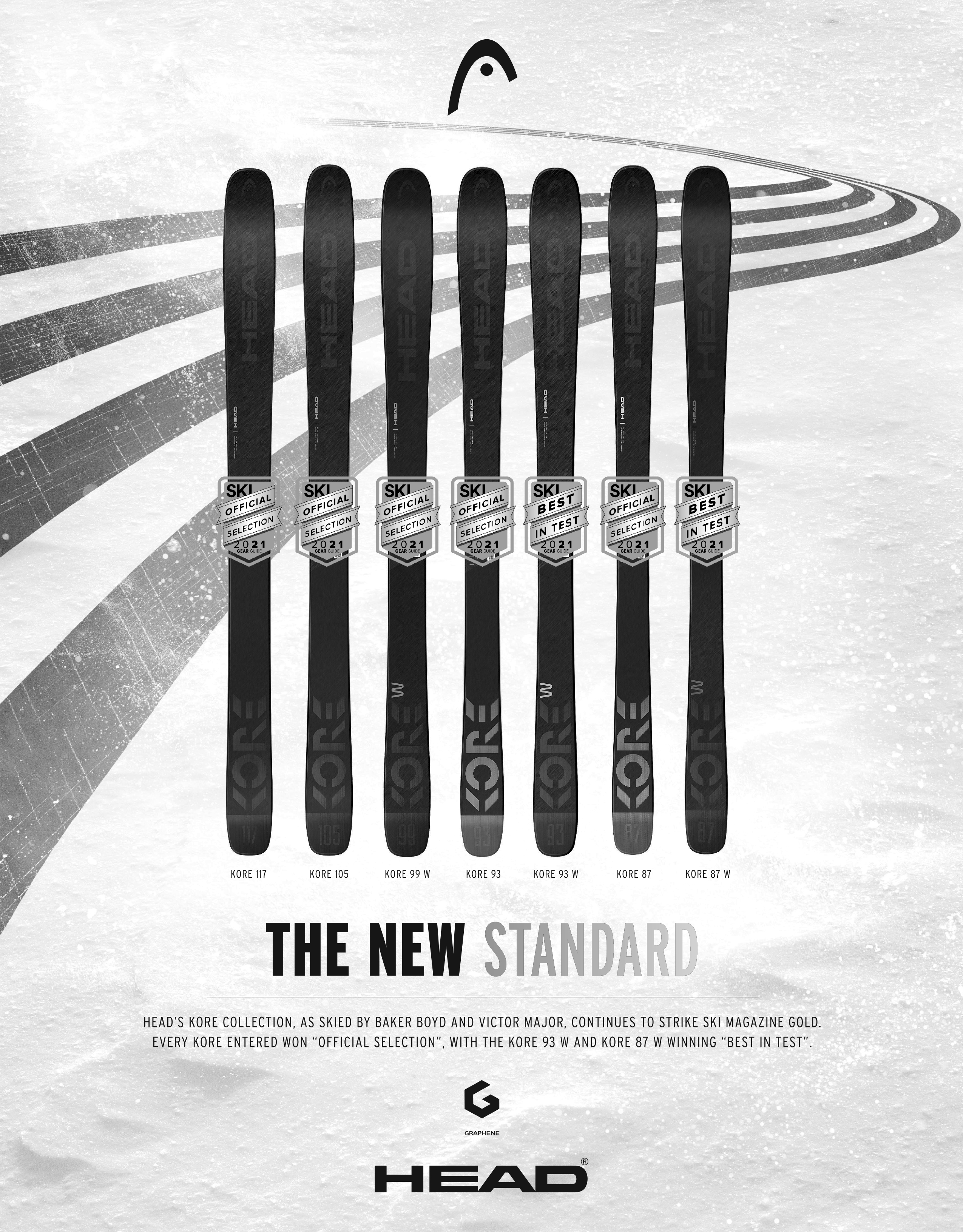 2001: Bergmann is involved in a near fatal avalanche accident

While ice climbing, Bergmann is caught in a massive avalanche that nearly kills him. He’s laid up for six months while recovering from a broken neck. “I had lots of time to think,” Bergmann recalls. “I decided at that point to change course and try something completely new.” He decides to formalize his education and moves to Kamloops, B.C. to enroll in Thompson Rivers University’s outdoor education program. At the same time, he begins training with the Association of Canadian Mountain Guides. In 2008, Bergmann graduates with a diploma from Thompson River University and becomes a certified IFMGA guide. “It was in Canada that I was exposed to the world of heli-skiing. I got a job working as a ski guide with Selkirk Tangiers Heli Skiing for a few seasons,” he explains. 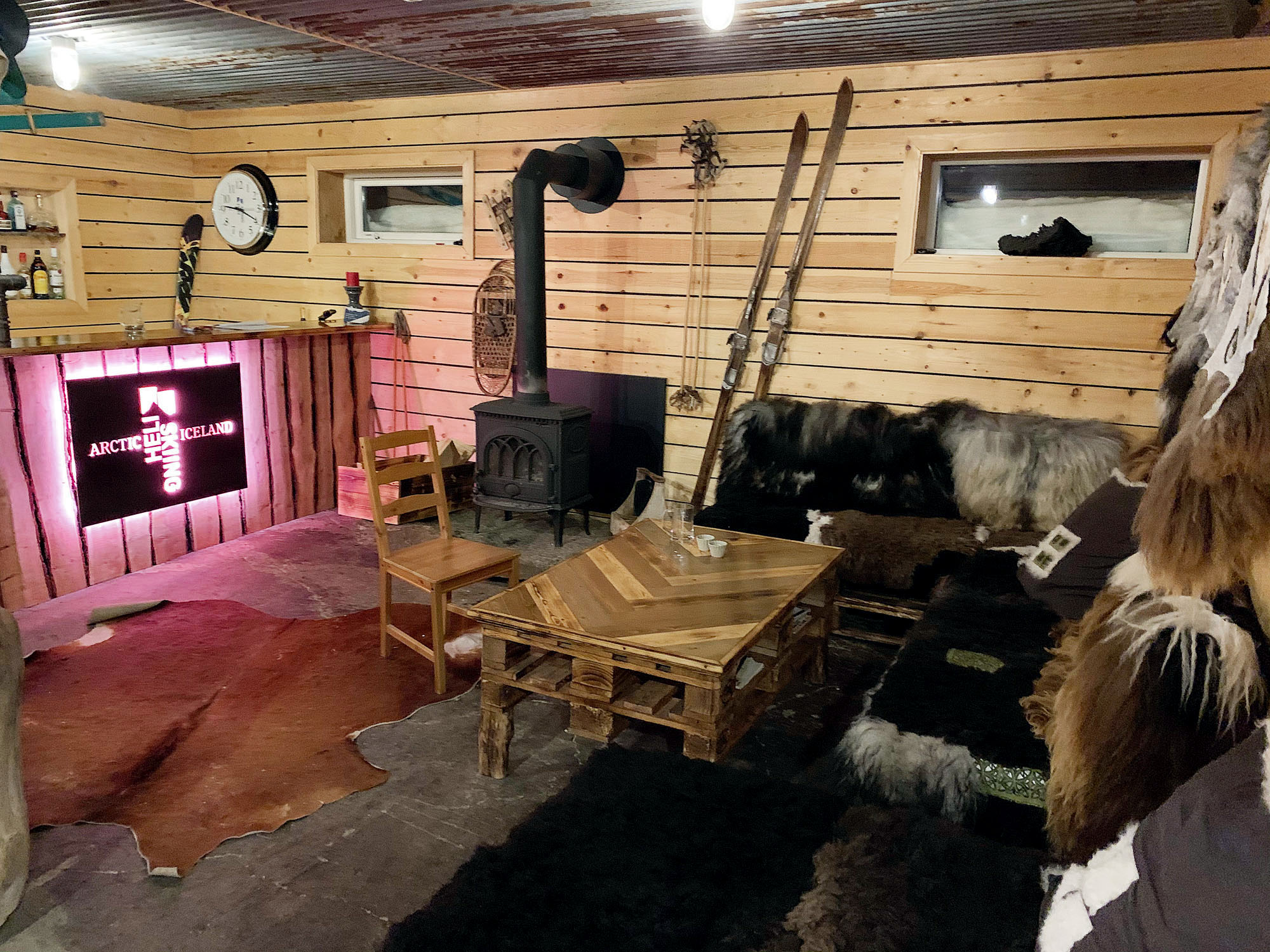 Bergman returns to Iceland as its first and only IFMGA guide just as the country faces financial ruin. “It actually proved the optimal time to start a heli-skiing business. Prior to the financial crisis in 2008, Iceland had become the most expensive place on the planet—the currency was just insane, and tourism didn’t really exist. Then the Icelandic Kroner lost 70 percent of its value, allowing me to start my business and promote and sell heli-skiing at a ridiculous price compared to Canada and other places where heli-skiing was a big thing.” Bergmann converts his family’s Raven Hill farm to a base lodge for Arctic Heli Skiing guests and acquires land permits from neighboring landowners for his heli-skiing tenure. Arctic Heli Skiing becomes the first heli-skiing operation in Iceland. “You can say fortunes turned dramatically for my family’s farm. We went from being the poorest farm in the valley to being the biggest business in the valley.”

After founding Arctic Heli Skiing, Bergmann does what many heli-skiing operators have done over the years to get the word out about their business: He invites Warren Miller Entertainment out to Iceland to film a segment for its 64th annual film, “Ticket to Ride.” Pro skiers Jess McMillan, Sierra Quitiquit, and ski racer Julia Mancuso get to be the first WME athletes to explore Iceland’s culture and the Troll Peninsula’s summit-to-sea lines. 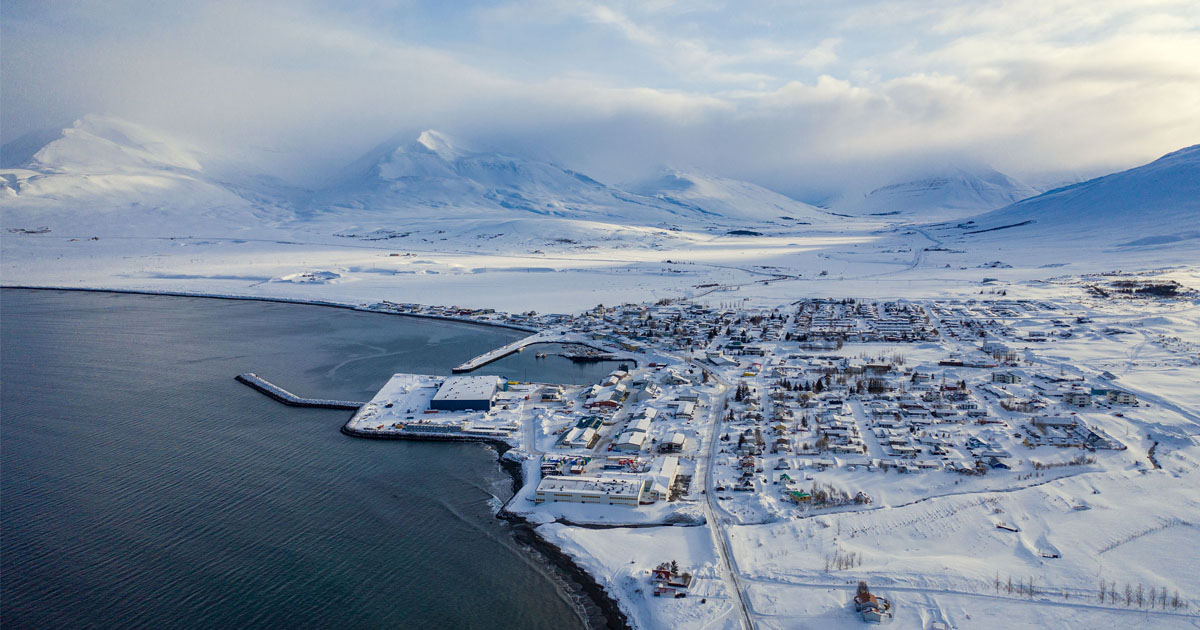 “When I started bringing people to the Troll Peninsula for ski touring in 1999, for the first couple of years, we wouldn’t see many other tourists or skiers,” Bergmann remembers. “I started promoting it as much as I could, bringing in photographers, writers, and film crews. Slowly, European mountain guides started showing up because the area was depicted as the cool new destination.” Now, there are two other heli-skiing operators in Iceland, and skiing and ski-touring is breathing new life into local businesses and Iceland’s tourism industry as a whole. “In the high-season—the end of March to May—every single guest house and Airbnb on the Troll Peninsula is now filled with skiers. Easy Jet started flying directly from Keflavík three times a week during the winter. We definitely created something where there was nothing. People here, especially in the hospitality industry, are super excited for what the ski touring season has done for them.”

2020: Baker Boyd and Victor Major get sendy in “Return to Retro” 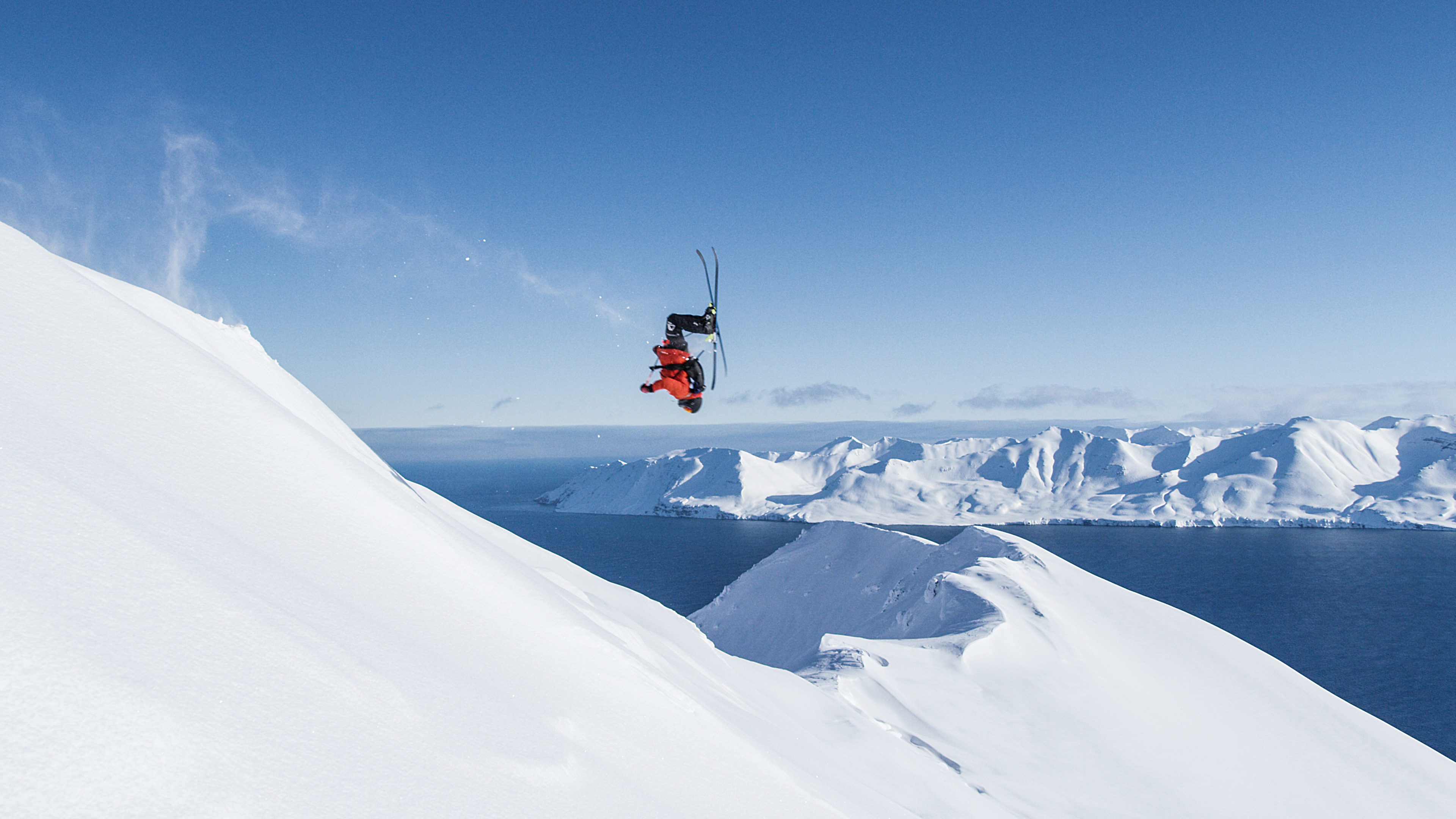 Baker Boyd throws a backflip while shooting with Warren Miller Entertainment for the 2020 film, "Future Retro."

WME returns to Iceland for the third time to film with Arctic Heli Skiing for its 71st annual film, “Future Retro.” This time, the dynamic duo of Baker Boyd and Victor Major showcase a different side to skiing on the Troll Peninsula. “There have been two other Warren Miller segments with us, in both cases they were less aggressive in terms of skiing but did a really great job of showing off Iceland’s beauty and culture,” Bergmann explains. “Now audiences are going to see a different side of Iceland with the boys charging big time.”

Arctic Heli Skiing is based about an hour outside the town of Akureyri in Northern Iceland. Guests should plan to arrive in Akureyri in the late afternoon or evening the day before their first ski day, and Arctic Heli will transport guests to the operation’s Klængshóll Lodge. Akureyri is a 45-minute flight or five-hour drive from Kevlavík International Airport.

Arctic Heli offers various heli-skiing packages depending on number of days and group size. Its Iceland Classic Program is the most affordably priced, offering guests a four- or six-day program that includes heli-skiing, accommodation, and meals starting at 7,400 EUR/person. For those on a shoestring budget and willing to earn their turns, Arctic Heli also offers numerous ski touring packages. Info: arcticheliskiing.com

Iceland is home to volcanoes, mountains, and glaciers galore, so choose your own adventure. The best skiing can be found on the Troll Peninsula, in the mountains surrounding the northern towns of Akureyri and Dalvik. Both towns are home to recreational ski areas and cat- and heli-skiing operations. Info: visiticeland.com