East Coast skiers are a breed apart. More often than not, we have every reason to complain about the conditions, terrain, lift-lines, you name it. Yet from real East Coast faithful, you’ll seldom hear a complaint, and there’s good reason for that. Skiers who grow up on the East Coast learn better than most at a young age that, when you’re on the mountains, nothing is guaranteed. From snow cover to weather conditions, things change on a dime out here. Yet, through good years and bad, you’d be hard-pressed to find a culture with more pride for their skiing roots than that which resides in the East. From Killington to Sugarloaf, Tucks to Powder Ridge, East Coasters know how to get after it, and they’re going to do it all damn winter, no matter what Ma Nature throws their way. 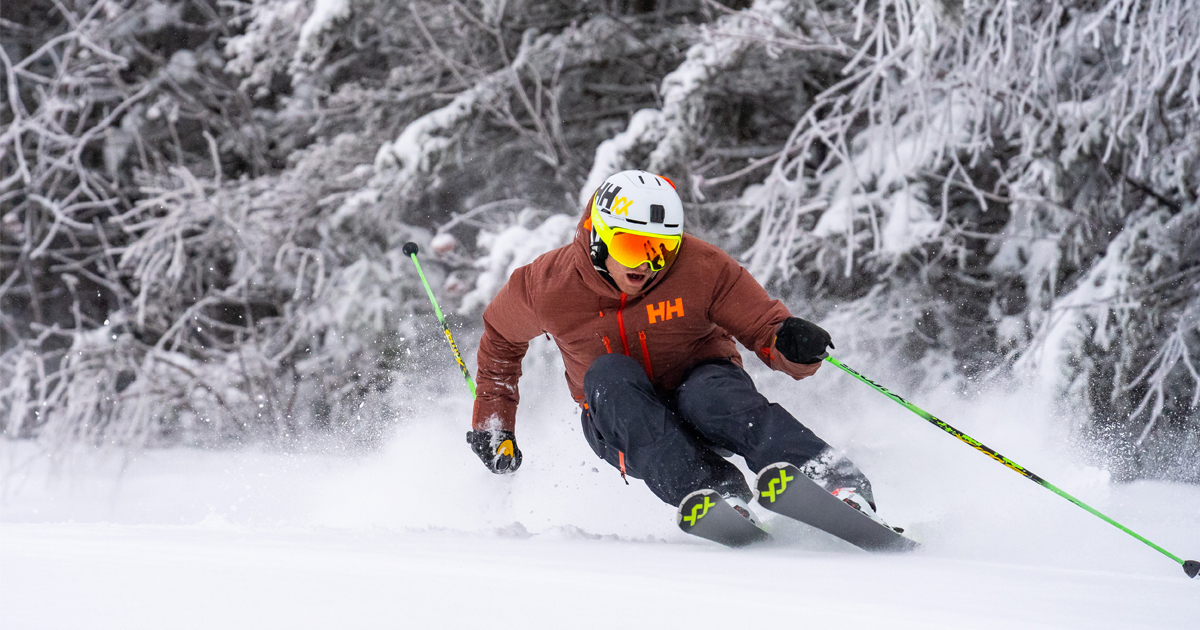 Jim Ryan is a born and bred East Coast ripper from Killington, Vermont. He cut his teeth bashing gates at Killington Mountain School and for Division I Colby College, and even from his new home in Jackson, Wyo., Jim still carries some of that New England fire within him, which is why he was especially stoked to be invited to film back at his old stomping for Warren Miller’s Future Retro, the production company’s 71st film and Ryan’s third consecutive appearance in a WME movie.

“You know,” says Ryan, “growing up in the East, you don’t have the gnarliest terrain or most high-consequence runs, but the passion for skiing is so strong. It doesn’t have to be sunny, it definitely doesn’t have to be pow, but you just go out there and ski with your friends every day. As a result, you can become really good technically and you develop a love for skiing that goes far beyond conditions.” 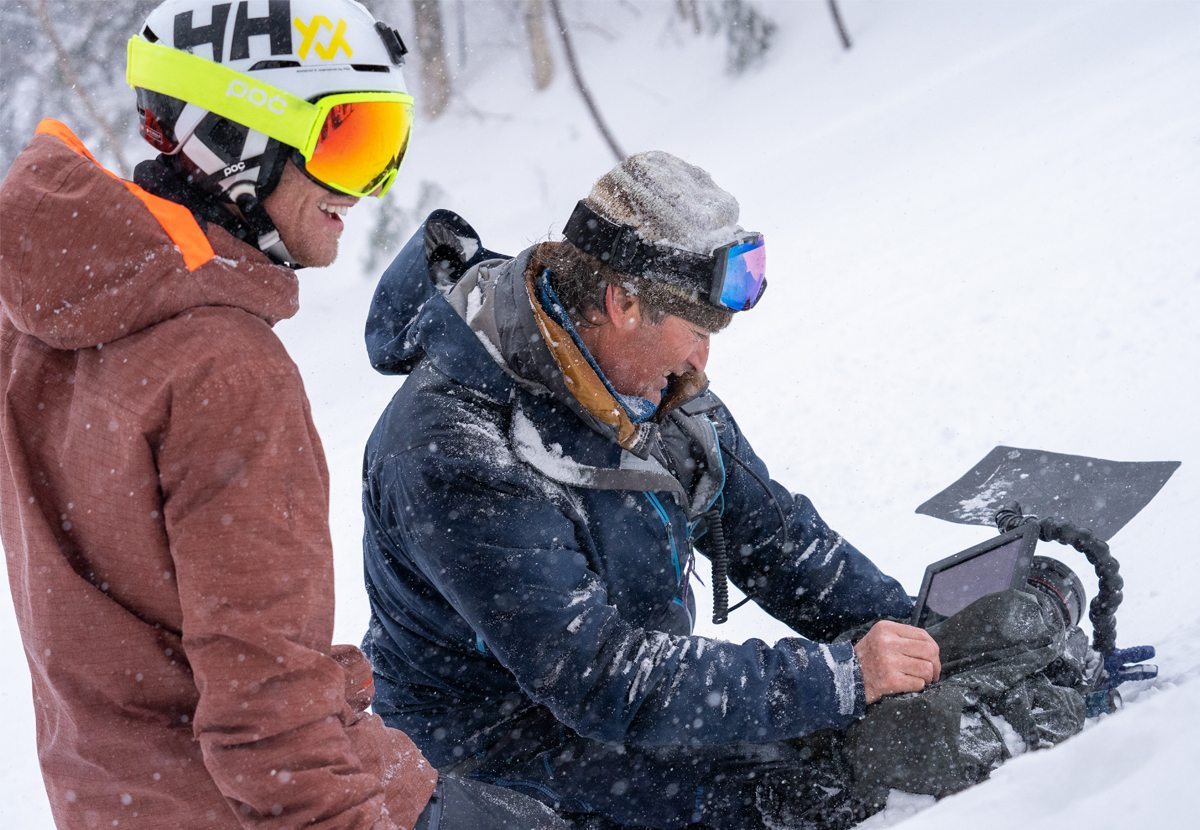 Like so many East Coasters before him who dreamt of pursuing a career in professional skiing, Jim Ryan eventually found himself west of the Mississippi chasing steep fall lines and blower pow. “It is definitely something I always wanted to do,” says Ryan about his career starring in ski films. “I think, like so many other skiers, that I thought about it when I was a kid but didn’t really allow myself to pursue it until I had graduated college.”

That’s exactly what he did. Not long after his career at Colby ended, Ryan bit the bullet with a former classmate from KMS and ultimately wound up in Jackson, skiing steep and deep lines in front of the lens for Warren Miller’s Timeless. “It has been as wonderful as I could have ever hoped. I have really enjoyed the filming process,” Ryan says of his experience with WME. “I had to ski lines I had never skied before, on mountains that I had never been to, which was a major challenge. But it really is fun because it is a challenge, and the relationship that I developed with my fellow skiers, as well as the filmers and photographers, really brought a ‘team’ aspect back into skiing for me.” After so many years of grinding on the racecourse, Ryan says this was a welcomed change of pace. “To be able to work on a film with such a great group of people and create an incredible product together was really wonderful.” 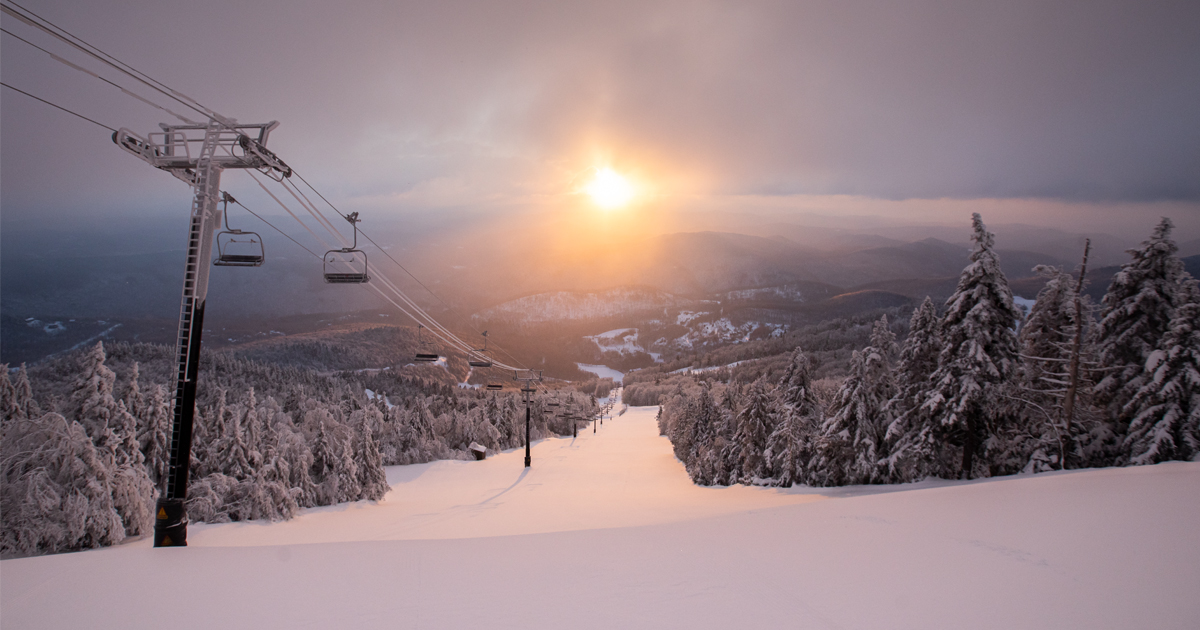 Another year means another Warren Miller film, but for Jim Ryan, this one is different. This time around, it’s personal, because his hometown hill is getting its very own feature. “I have to admit, I was more than a little excited to come back to Killington and showcase the kind of skiing that I was raised on,” says Ryan about WME’s return to K Town.

With the Audi FIS World Cup coming to Killington for the third year in a row this Thanksgiving weekend, The Beast of the East has been thrown back into the spotlight, and Jim Ryan could not be more stoked. “I mean, I just think that East Coast skiing is so awesome,” gushes Ryan. “I ski powder all the time now, but still, I have these beautiful dreams of just absolutely shredding east coast corduroy. Just getting out there and perfecting the art, or at least trying to. I absolutely love it, I think it’s as fun as anything you can do on skis.” 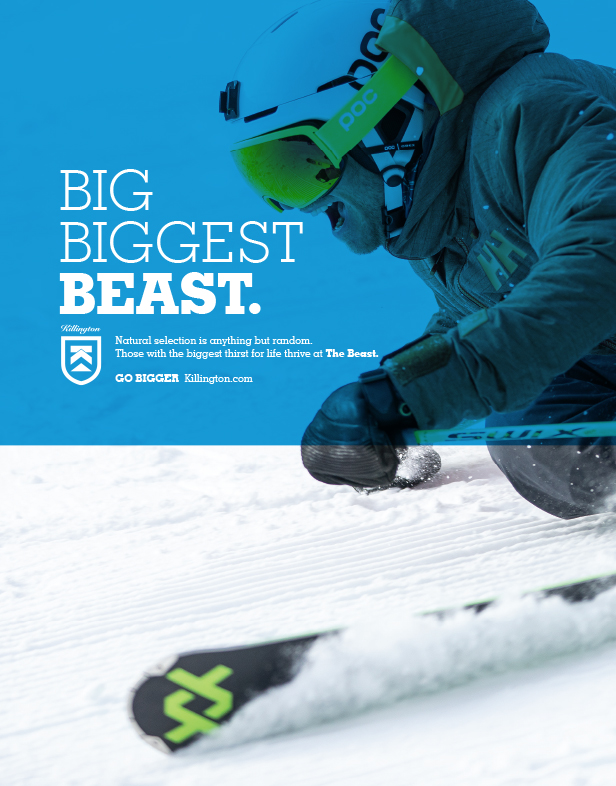 A Killington segment not only brings long-overdue ski film exposure back to the East, but it also meant a welcomed sense of familiarity for Jim. “I go on all of these ski trips and it’s like ‘Oh boy here we go, some new mountain I don’t know and terrain I’m unfamiliar with, I hope I ski well,’” says Ryan. “So when I heard we were going to Killington, I was like, ‘Oh man, I freakin’ got this!’ I also knew I was going with Tom Day and Kaylin Richardson, so I was very confident in the team and the environment as well as in my own skill. Going into that trip I was very excited.” 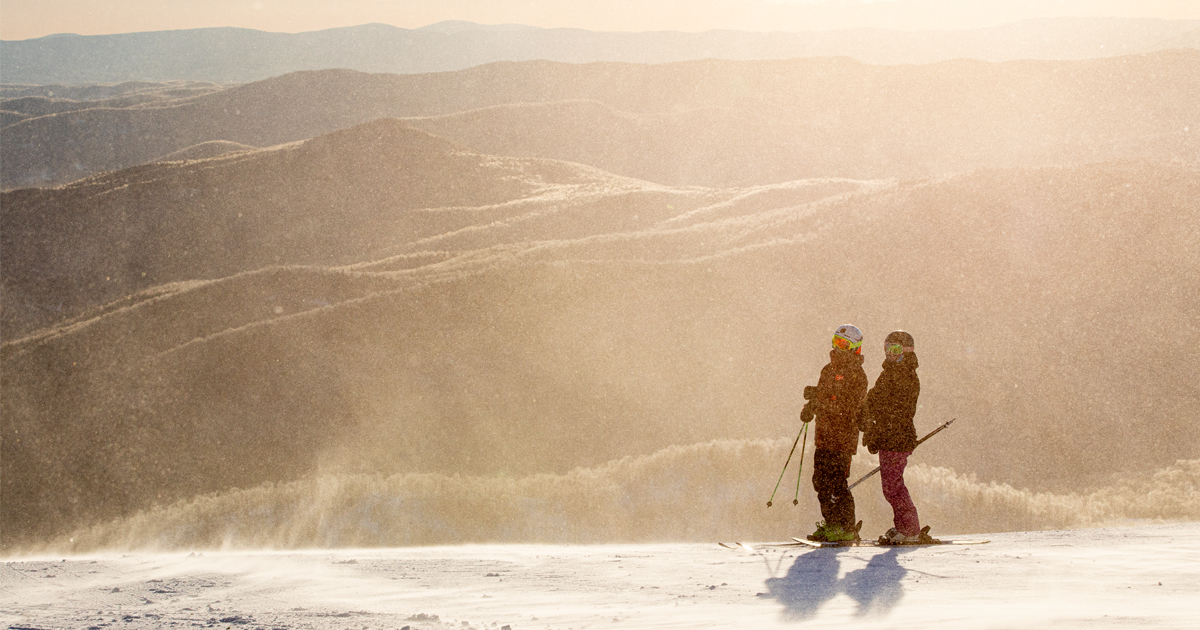 Ryan embodies diehard, East Coast spirit in the fullest, and that is evident not only in his attitude and stoke for the sport but also in the type of projects that he pours his time and energy into. This fall, keep an eye out for his new series, In Plain Sight, which features the kind of skiing Jim was raised on; in-bounds, rugged, under-the-lift skiing. “I think all-too-often, ski media takes place so far from where the average skier actually skis,” says Ryan, “so I created In Plain Sight to show how much fun skiing can be right under the lift and also how hard you can shred without having to travel via helicopter.”

As far as Jim Ryan is concerned, he’s just getting started. He took his East Coast grit and passion for skiing and brought it to the expansive terrain of the West, and as a result, is living out his dream of being a professional skier. No matter where it takes him, he’ll always be a Vermonter at heart, and you can bet he’ll never turn down an opportunity to rip up the Beast. 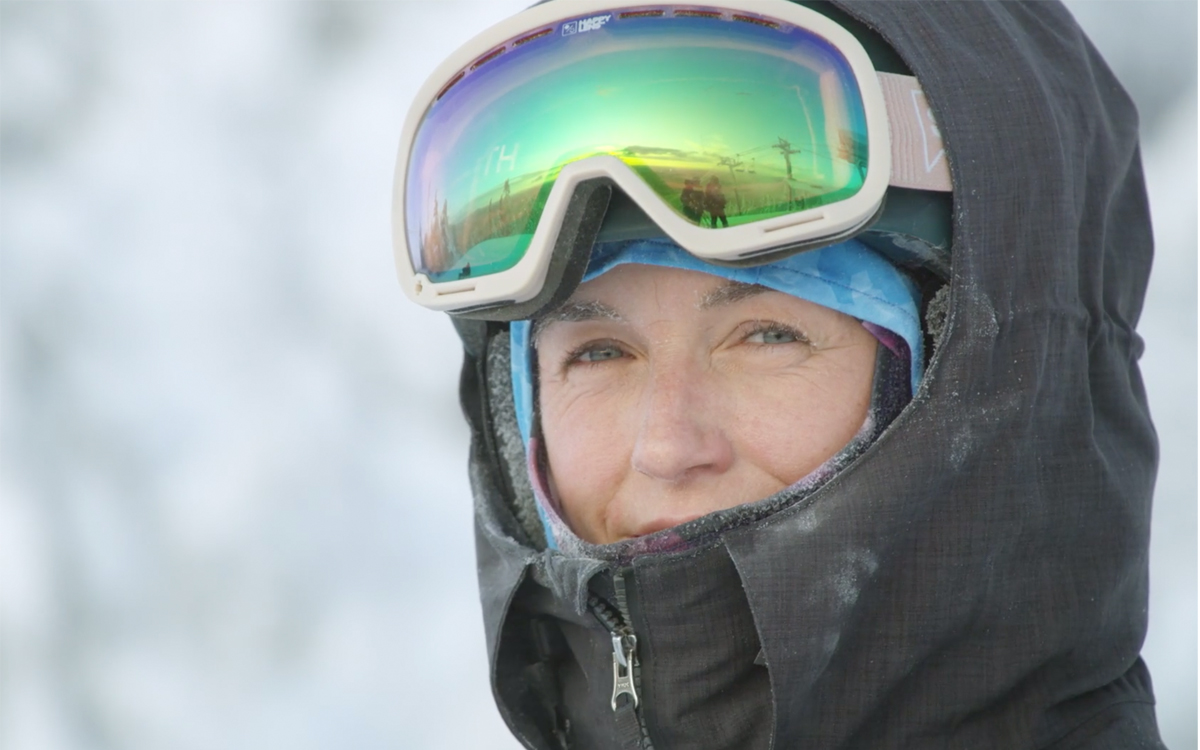 Think you’re hardcore? Killington 100 Day Club member Sharon Mitchill racks up the days and has the sticker to prove it.

Nowhere is the indominable spirit and tenacity of Eastern skiers on display more than inside Killington’s 100 Day Club. You see, the only way to join is to ski a minimum of 100 days per season—no matter the weather, the snow conditions, injuries, or your fitness level. So who are these legs-of-steel unicorns who populate this special society? Meet Sharon Mitchill, who’s spent nearly a decade racking up 100 days per season on the slopes of Killington.

WME: How many years have you been a member of the 100 Day Club?

WME: How did you end up joining?

SM: Skiing or riding 100 days in a single season at Killingtno or Pico is the only way to join. It wasn’t a conscious decision at first. I genuinely enjoyed skiing all conditions and found myself out there more often than not. I’d be lying if I said it didn’t motivate me to get out more.

WME: Do you get anything for being a member?

SM: A sweet hat and sticker, a party, strong legs, and a good overall feeling inside.

WME: How would you describe your fellow members of the 100 Day Club?

SM: Devoted, generally stoked! I am amazed at the folks who get out day after day, all day, any weather, any conditions. The training pays off. We’re scrappy.

WME: Where are you from originally?

WME: How long have you been skiing at Killington?

SM: Heading into my 14th season!

WME: When did you start skiing?

SM: 1988. Mom made us sidestep and herring bone up the mountain before buying us lift tickets. But I really started skiing the day my Mom let me loose. Best. Day. Ever.

SM: My first impression of Killington was November 2007 and everyone was so happy...I should say stoked for the upcoming ski season. It reminded me of what I felt like as a child when school let out in June. I thought, these people are confusing winter with summer. That level of excitement was new to me, but you see it everywhere. Killington Resort really sets the tone. They are committed to making the kind decisions that are conducive to the local community and environment. But truthfully, I moved here because I love Vermont ... always have, always will. The rivers, pristine lakes and reservoirs, exposed roots on old hiking trails, plenty of open space. It evokes feelings of stepping back into a simpler time. Killington offers a balance of that solitude and a tight knit community that reaches far beyond its town borders. Collectively, we see the value of staying active. It keeps everyone upbeat, clear minded. Visitors see it, they feel it.

Where to Stay: Convenient and reasonably priced, the Killington Grand makes a fine base camp and also offers easy-access dining and slope access. For something more, er, Vermont, the Snowed Inn has individually decorated rooms and suites located 1.5 miles from the base of the resort; rates include a generous continental breakfast spread.

Eat + Drinking: Although Killington’s legendary Access Road scene will likely be tamped down this season, options exist, including supporting local eateries such as TK and TK, and enjoying the outdoor après on tap at the TK.

This content was created in partnership with SKI Magazine.