GEAR TALK: The Highs And Lows of Testing Skis in August

Mt. Shasta’s Hotlum Glacier, the Volkl VTA 98 and the turns that salvaged a 14-hour epic.

I’ve spent the summer testing and getting familiar with the Volkl VTA 98 on various ski-mountaineering objectives in preparation for one, specific objective with my good friend Spencer. Back in Boulder, Colorado, we frequently engaged in type-two fun and were long overdue for an adventure. Climbing and skiing Mt. Shasta’s glaciated north face in a single push seemed like the ultimate reunion and testing ground.

The day’s objective was to hike 2.5 miles to snow line, ascend the Hotlum Glacier, exit lookers left just below the bergschrund, tag the summit, navigate our way back to the glacier, harvest 4000 feet of ripe, early August corn to where our hiking shoes patiently awaited our smelly feet, and finish the day with a sunny, sweaty slog back to the car. Sounds simple, right? We knew we were in for a big day but had no idea of the epic that awaited to test our sanity.

The day started like any other summer ski adventure. We arrived late the night before at the Brewer Creek Trailhead, which sits low on Mt. Shasta’s northern flank at 7,280 feet, made a quick dinner, fiddled with our gear, and crawled into our sleeping bags to catch a few hours of sleep.

The 4:00 a.m. alarm came as a welcomed relief from the tossing and turning. I never sleep well before any adventure. I’m like a kid on Christmas Eve, subconsciously counting down the seconds until it’s time to spring out of bed and hit the ground running. This calm, warm, and groggy morning was no exception. We exchanged silent greetings through fleeting eye contact, forced some fistfuls of granola into our still sleeping stomachs, and conducted our final gear check.

That’s when I realized I forgot my gloves (I know, rookie move). Obviously, there are far more consequential things to leave on the gear shelf, but the forecast was calling for a high of 33 °F at the summit and winds of up to 45 mph; usually not ideal conditions for bare hands. In Spencer’s light glove arsenal, he had liners, mid-weight shells, and leather belay gloves he scavenged off his climbing harness. Three inadequate glove options for the two of us had to suffice. The thought of having to bail because of something as half-witted as forgetting gloves started to settle in. No mountain is worth losing fingers over, so we hoped for the best, started our GPS, and meandered off into the dark. 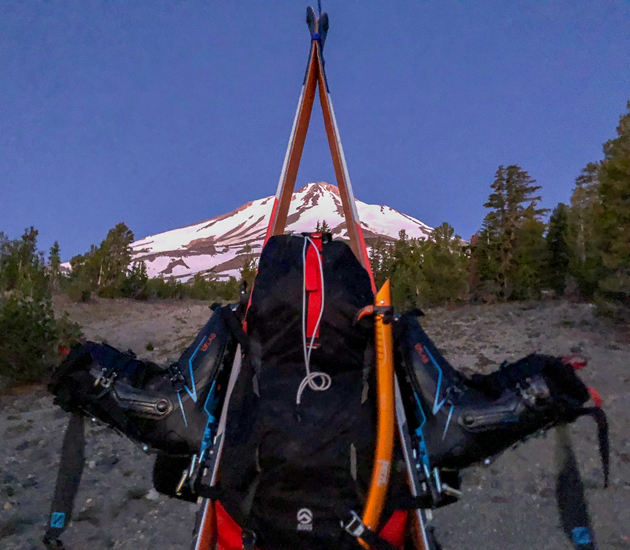 We made great time to the base of the Hotlum Glacier, one of the only remaining glaciers in the contiguous U.S. and a consistent, quality option for year-round shredding. We had a quick snack, transitioned to ski gear, slathered on a thick layer of sunscreen, and roped up. 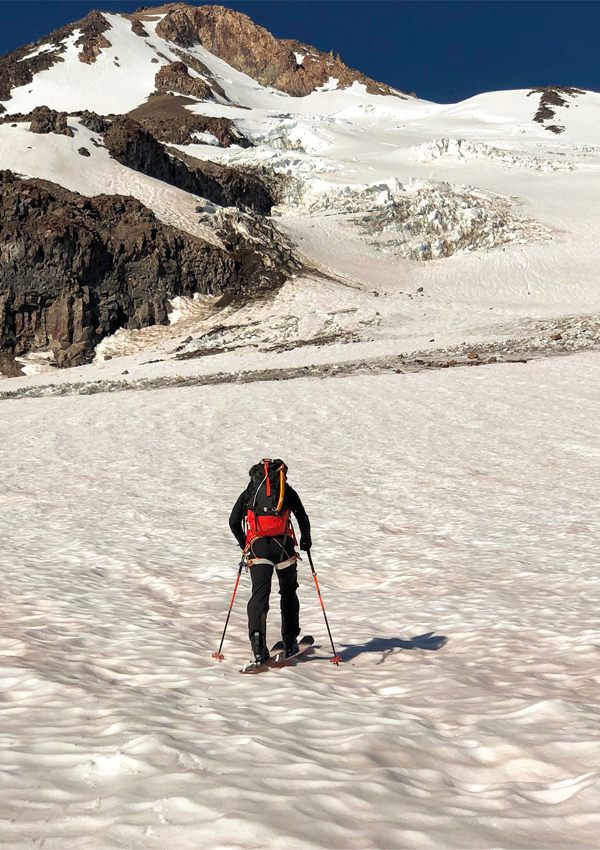 The author making quick work of the lower apron of the Hotlum Glacier. PC: Spencer Graham

The VTA 98’s relatively flat profile boasts just enough tip rocker for efficient uphill travel as Spencer and I knocked off the lower quarter of the glacier. But as the pitch steepened, we could only rely on our skins for so long and had to switch to crampons. The crevasses were clearly defined, and the northern aspect kept the snow surface free of sun cupping that generally ravages late-season snow. As we ascended while navigating the three major seracs, we stopped a few times to stare into the bowels of the glacier through some of the more impressive crevasses. As we peered down, we were greeted with the icy behemoth’s cooling exhalation. It's humbling moving amongst such impressive terrain, and even when the late-season melting and high temps left little mystery to our safe travel across the established snow bridges, the glacier demanded our full attention. In the event of a catastrophe, we kept 15m of rope hung slightly taught between us to arrest a fall. The stakes were high but the stoke was higher. 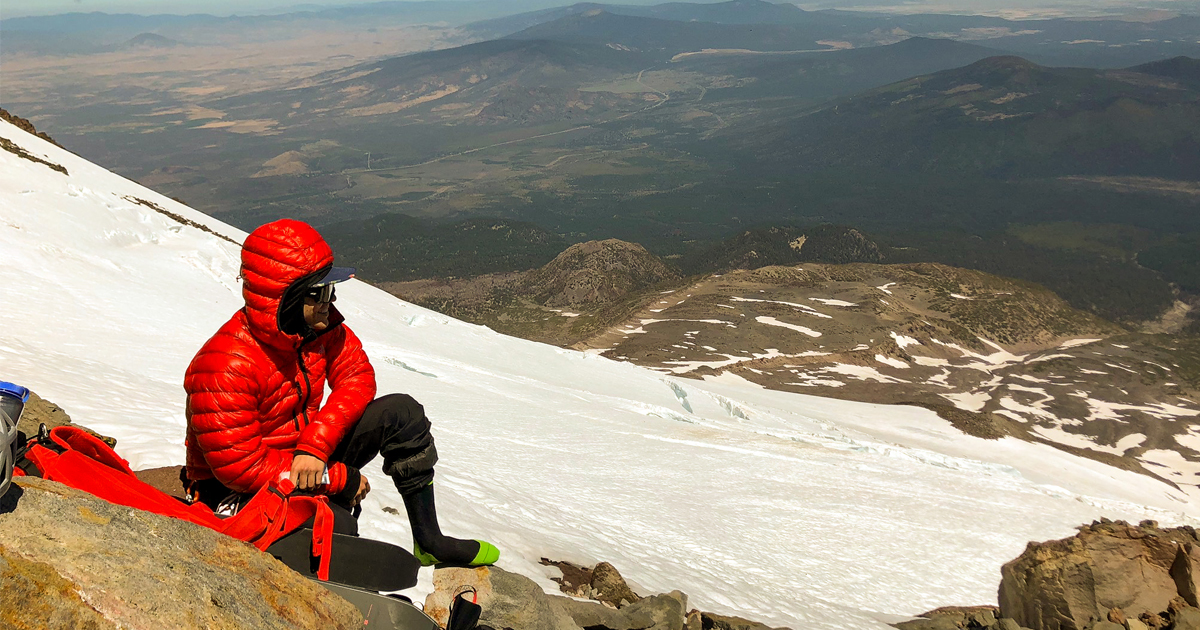 The author pausing to give his toes a break after exiting the Hotlum Glacier around 13,000 feet. PC: Spencer Graham

We exited the glacier at just over 13,000 feet, found a rocky outcropping to have lunch, and I took off my ski boots to ease the throbbing of my bunion-infested hobbit feet. As we refueled, we debated our two immediate options: call it, put our skis on, and descend the glacier back the way we came, or finish the remaining 1200 vertical feet to the summit. Spencer had never been on Shasta before, and with idyllic weather conditions, we decided to push on. This was the decision that turned what could have been a fun day of summer glacier skiing into a 14-hour epic. 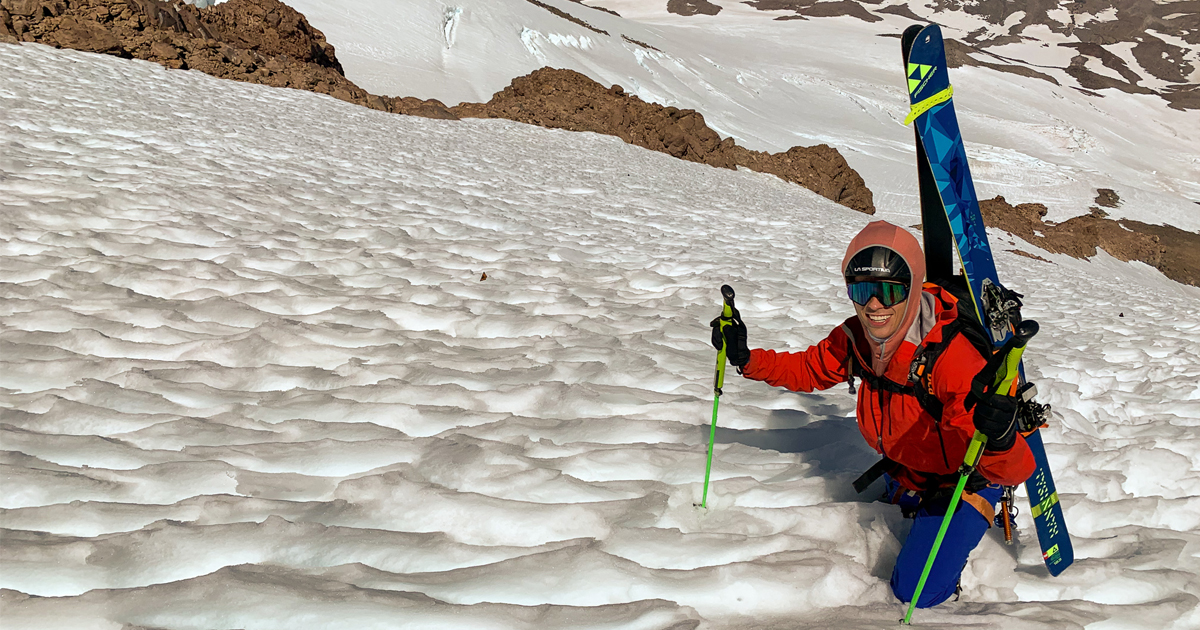 Spencer tries to stay stoked as the fins work to eat his legs. PC: Nat Houston

What looked like a moderately steep snow gully, roughly 45 degrees at its steepest, stood between us and the summit cone. We affixed our skis to our packs, crampons to our boots, and began kicking steps. Within minutes, the snow quality drastically deteriorated and deep fins of varying structure took over every inch of the gully. Each step was a gamble. Either our front points would gain purchase and hold our weight or the fin would explode and send that leg post-holing deep into the snowpack. To say that progress was slow is an understatement. Each step was a battle, and as we got higher, the reality of bailing began to diminish. Since it was sketchy to climb, it would be stupid to try to descend safely and impossible to ski. The only way was up.

It took us almost two hours to ascend roughly 600 vertical feet to the top of the gully, about four times slower than our prior pace. This left us drained, beat down, and with 500 feet of steep scree to gain in our ski boots. We initially welcomed the thought that anything would be easier than the crust fins, that is until we took our first few steps into the eroding landscape that stood between us and the summit. Ascending a natural stairmaster of choss was demoralizing. We practically sprinted to plant the next foot before the other one fell away, forcing a face plant. After leaving the security of our sleeping bags 9.5 hours earlier, we pulled ourselves onto the summit and collapsed in a fit of gibberish, laughter, and primal grunts.

As any mountaineer knows all too well, the summit is only half the battle. We slurped down our remaining GUs, shared a moment of solace on the summit, and shouldered our packs. Remembering our final push to the summit and the horrifying crust fins, we were forced to find a new way back to the Hotlum Glacier. Our tired minds reverted to the path of least resistance as we located a gully to the south that seemed to retreat in the right direction. We were wrong. The footing was trash, and we practically slid a few hundred feet on our keisters and landed on a snowfield two large ridges away from our objective. It took some serious traversing to regain the proper line, and about 11 hours into the day, we reached a safe entrance back onto the Hotlum.

The second I clicked into the VTA 98s, a rush of excitement washed over me. I suddenly noticed their minimal swing weight and light construction as I wiggled my legs in succession to see if there was any try hard left. I dropped in and snaked our path down the glacier. Taking it one at a time, we safely navigated the Hotlum’s icy jaws. It’s amazing how quickly a beautiful slash through buttery corn can turn a whole day around. Our painful grimaces evolved into ear-to-ear grins as the stoke-hoots escaped us. I immediately noticed the responsiveness of my ski’s stiff tails as I snapped from turn to turn, catching air during each transition. The carbon reinforced tips effortlessly sliced through any imperfections on the surface of the glacier and allowed for uncompromised edge hold as if I was arching slalom turns on fresh corduroy. While I skied multiple peaks in Lassen Volcanic Park, the Tahoe area, and the eastern Sierra prior to this trip, the descents were more mountaineering in nature as the routes chosen made for lots of hop turns and slow navigation. But the Hotlum’s wide flanks left me room to let the skis run and truly see what they’re made of. And I must say, I was beyond impressed. Yes, these skis are not Volkl’s lightest offering and are heavier than the mountaineering focused skis I’m used to lugging up large mountains, but they surely made up for it with their aggressive, responsive, and exhilarating downhill performance. I had nostalgic flashbacks to my high school ski racing days on my Volkl Race Tigers, the last time I skied Volkls.

A panorama from Mt. Shasta’s summit cone looking down over Shastina and the famed Avalanche Gulch to the left. PC: Spencer Graham

I’ve always been certain about the quality of Volkl skis, but until this soul-crushing day on Mt. Shasta, I was skeptical of their mountaineering offerings. It’s safe to say that these skis alone saved the day. The VTA 98s are ideal for the aspiring ski mountaineer that doesn’t mind carrying a few more pounds to ensure a controlled and powerful descent. And at 98mm underfoot, these are great for the skier looking for a one ski quiver who splits time between deep winter snow and spring peak-bagging objectives.

Obviously, any chance to safely explore mountains with your closest friends is a blessing and something I will never take for granted. But a harsh reality remains: sometimes the negativity that surfaces during intense periods of suffering can overshadow an entire experience. Thanks to the VTA 98s, and my partner in pain, Spencer, I only have positive memories of our time on one of North America’s classic peaks.

Nat Houston is an outdoor loving, maple syrup slurping, East Coast native who grew up skiing at Bromley Mountain just outside his hometown of Landgrove, Vermont. After graduating from the University of Colorado in 2014, he stuck around Boulder for business and pleasure, working for companies like Freeskier Magazine and Dynafit, but mostly skiing and climbing in the vast mountains of the American West. Today, he lives in Berkeley, CA so he can explore the mountains of California and the Pacific Northwest, sample the local taco offerings, and write gear reviews for Warren Miller Entertainment.