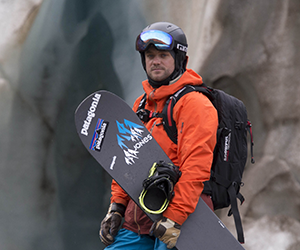 Growing up in the portage town of Fairbanks, Alaska, Ryland Bell hasn’t wandered far from the small town and towering peaks that opened the door to a life of commercial fishing and big mountain riding. As a commercial fisherman in the summer months, Bell spends 20-plus hour days on his boat casting for salmon and halibut while making time to explore the backcountry terrain that is his backyard. During the winter months, he resides in Lake Tahoe and rides Squaw Valley with some of snowboarding biggest icons like Jeremy Jones.

As a kid, Bell and his family spent their winters in Fairbanks riding, skiing, sledding, and trekking through the mountains. At age 12 Bell discovered snowboarding and knew it held his future. When not hiking with family, Bell and his friends would use hay bales to build kickers at the aptly named Moose Mountain only to find the next day that herds of moose had eaten most of their jumps. So what would they do? Get back to it building jumps and other freestyle features.

After competing in several freeriding competitions, Bell’s passion for riding big lines extended to placing on the podium at competitions like The North Face American Big Mountain, Freewide World Tour stops in California, and the Swatch Freeride World Tour in Haines, AK in 2016 with a first place finish. Most days, Bell can be found skinning uphill on his splitboard in Haines or Juneau, Alaska or the Tahoe backcountry.