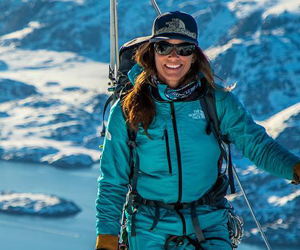 Name a person who inspires you to be a better skier/rider?
My husband Rob.

In lieu of our 70th film, what’s your most memorable or favorite Warren Miller film or segment – past or present?
any and all that Rob was in during the '90s! Especially the one from Russia

What would you do if you won the lottery?
Depends on how big the lottery! Probably a house on the beach in Kauai if it was over 15 million, plus give an endowment to Alaska Wilderness League.

Best meal you can cook?
Elk meatballs and gluten-free spaghetti

Favorite chairlift and why?
JHMR Tram when it's walk on because options are endless

The most interesting thing you’ve read or seen this year? (books, podcasts, TV shows)
I love watching the truth come out about the biased and unfair push to drill in the Arctic National Wildlife Refuge like in the July Politico whistleblowing articlehttps://www.politico.com/interactives/2019/trump-science-alaska-drilling-rush/?emci=63a935d5-9db4-e911-bcd0-281878391efb&emdi=3a369c8d-23b5-e911-bcd0-281878391efb&ceid=1878951

Fictitious character you most identify with from a book, movie, etc. and why?
Ayla from Clan of the Cave Bear. She has a wolf, she hunts, she travels, she's fearless and most of all, she's deeply loving.

Highlight memory from filming with WME for this year's film?
Watching my two daughters ski for the camera. They were so honest the way that kids are, with no pretense, just a love for skiing.

Gear you are loving right now, on or off the ski slopes, and why?
The North Face FutureLight series since it's the first time that layering has become really easy and I can forget about what I'm wearing when I'm wearing it.

What is a cause you care about that you'd love to share with the Warren Miller audience?
Protecting the Arctic National Wildlife Refuge from oil and gas drilling. It's a human rights and wildlife, wilderness, public lands issue that gives us a chance to do the right thing in this last great expanse of Alaska instead of repeat the imperialistic approach our nation is so known for. alaskawild.org #protectthearcticrefuge ourarcticrefuge.org

Do you have any sponsors, if yes, who?
The North Face