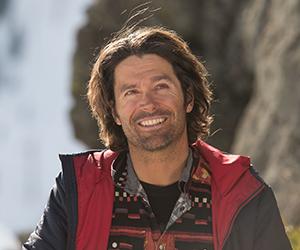 Snowboarding legend and idol to many riders, Jeremy Jones, first took to a snowboard in 1984 in a pretty peculiar place – Cape Cod, Massachusetts. Like most people who try a new sport for the first time, he didn’t excel right away. Jump ahead three years and after linking a few feel-toe turns on that same tiny hill in Cape Code, Jones found his calling. “The feeling of making those first turns was indescribable,” says Jones. “It was as if someone had just waved a magic wand and POOF!”

Known for his adventurous spirit and dedication to progression, Jones turned his passion for riding into a full-time career. When snowboarding was just a fringe sport to the masses, it was a life staple for Jones. From the time he was 9 years old and into his high school years, he found himself hiking up resort hills when snowboarders weren’t allowed to on the lifts and trekked uphill in the middle of the night to snag first ascents as soon as the sun rose.

Beyond his status of being possibly the world’s best rider, Jones is also a pioneer in the industry. He’s helped discover and tracked new lines across the globe, has won countless awards, and started a snowboard company. Since its infancy in 2009, Jones Snowboards has remained focused on backcountry safety and putting the use of sustainable manufacturing practices and healthy work environments at the forefront of the brand.

Jones is also tagged with expanding backcountry snowboarding by exposing terrain reachable with a splitboard. He says he racks up about 80 days per year on his splitboard because it opens up new possibilities in areas where there are no chairlifts to be found. He also prefers splitboarding because of the solitude it brings.

While Jones is growing older, he’s certainly not slowing down, but a rewarding day takes on a new form. These days when he’s not touring above tree line or heli-skiing, Jones prefers to carve groomers with his family at Squaw Valley.