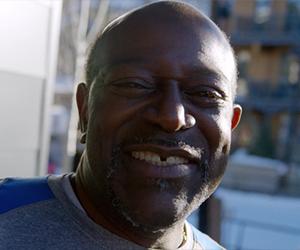 Who are your sponsors?

I was born in Jamaica, New York in the very early sixties. Growing up and experiencing the sights and sounds of urban New York, no mountains in sight. My parents moved our family to the Catskill mountains, to a little-known town called Big Indian. Just 6 miles away from a ski area, which became my favorite playground.

I had no idea what skiing was or why so many people wanted to be outside in the cold every day. After finding ski equipment in the attic of our house I tried to figure out how to ski, I’m still trying to figure that out to this day.

During the early seventies, we had major snow falls every November, Thanksgiving break, I knew I would be skiing. Before long skiing became my winter delight.

Every opportunity I had I would go to the mountain and try to improve my skiing.

My senior year of high school my family moved back downstate to Long Island.  I went to college and after graduation I returned to Long Island and began navigating and experiencing real urban city life. Skiing was on the back burner for a few years.

In the nineties I became involved with the National Brotherhood of Skiers and held many positions within the organization. I started as the club President of the International Sisterhood of Skiers and Athletes (first Caribbean club) and moved on to become the Midwest Region Competition director. In 2003 I became a USSA coach for the national team, “Team NBS” and in 2008 I was appointed the Olympic Scholarship Fund Administrator. During my tenure as OSF administrator the national team grew to 15 athletes. In 2016 I was appointed the National Competition Director and in 2018 I was voted in as the Executive Vice President of the National Brotherhood of Skiers. I served for two years and was elected National President of the NBS in March of 2020.

I am a member of The Jazz-Ma-Tazz ski club in New Orleans, Louisiana in the Midwest Region.

Fortunately, I married Karen Rivers, also a ski instructor and coach and we are the parents of four children, most notably the Rivers’ Triplets, Helaina, Henniyah and Henri IV all Alpine and Skier Cross athletes for Team NBS.

Skiing and enjoying the outdoors will always be in this family’s DNA.