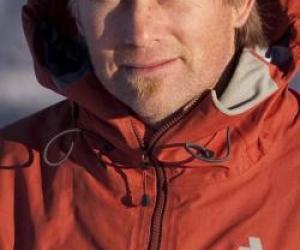 What’s more important to you than skiing? Spending time with my wife and my two year old daughter.

Other than skiing, what has been your latest passion? Surfing has been my passion for the past 20 years. Unfortunately I don't get paid to surf.

Who has had the biggest influence in your life and why? My brother always pushes me to work and play harder.

What had the biggest impact on your life in the past year? My daughter Jayden.

If you could ski with any person in the world who would it be? I'd Like to guide Obama heli skiing in AK.

What was your favorite trip of the ‘09 season? Tough question because it started in Las Lenas Argentina in September after the Santa Rosa storm and continued with pioneering a new zone in southern Utah and finished up in Alaska with an epic first ascent-descent of Rainbow Peak. Then we ended up in Norway skiing blower powder on legit terrain- 500 miles from the north pole. Heli guiding in Alaska was all time but the expedition to Spitzbergen was one for the bucket list.

What has been your best memory of filming with the Warren Miller crew over the years?
This last expedition to Norway was the most unique Warren Miller adventure. And the most memorable moment was the midnight session where we skied from 8 pm until 6 am watching the sun do laps around the sky.  We were all giddy when we finally decided to head back to the tent.

What is your next big goal? Teach my two year daughter, Jayden, to ski.