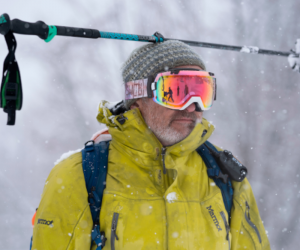 A key player in the cast of colorful characters who defined the 1970s concept of “extreme skiing” in the Alps, John Falkiner has become one of Europe’s most sought-after mountain guides. But his favorite mountain playground isn’t even in the Alps—it’s in Greece. In our 2022 film, Michelle Parker and McKenna Peterson join Falkiner to explore the Olympus Range, where a small community of dedicated backcountry skiers has taken root in the last decade. In the shadow of the ancient gods, Parker and Peterson receive perspective and insights from a revered elder of the sport, while helping the locals tackle some of the biggest lines in southeastern Europe.