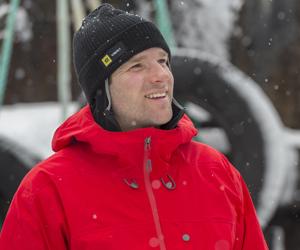 Where did you grow up? I grew up in Tahoe City CA and skied at Squaw Valley and Alpine Meadows

Current favorite piece/pieces of gear?
Volkl BMT 122, I am constantly impressed with how hard I ski this touring ski. Oh and my Stio Alpine Pullover because it's tight AF.

What’s your “Back in my day, we…”?
Didn't have cell phones. We'd just get dropped off at the hill and stay until we could get a ride home. Tickets were 5 bucks for the kids who didn't have passes and we knew about every deal, scam and free scrap of food you could find. We also had a sizable mental inventory of all the hot tubs we could poach. We called our selves the Alkasquawlics because we got after it every day we could (oh and we liked to party too). The ski hill was our home, we even slept in the locker rooms some nights. We had every feature mapped out so that we could get as many hits in as possible per lap. When it dumped, we went to work punching cliffs and pushing each other to try new tricks. Riding down mountains was all we thought about.

Ideal down day?
Just depends on how hard the beatings were leading up to it.

Favorite on-mountain fuel/snack?
Hi Ball Energy Water, it gets me fired up without the jitters of a strong coffee and I feel good about drinking it because the ingredients are organic and thoughtfully sourced. I'm also very addicted to the new Tender Belly pork jerky, it’s like a bacon in a bag. It's unreal.

Spiciest/most intimidating line you've skied or ridden this year?
The spiciest line was the first one I skied this winter at Points North Heli in AK. I decided to roll the dice and gap my slough on the first line of the trip (and it was my first legit line of the season), I turned a little low on the first take off because I wasn't quite skiing it with purpose and I hit a rock. I got bucked but somehow landed on my feet on my second take off and it popped me just perfectly out into the landing pad above the bergschrund.

Goals in skiing/riding this next year?
I just want to have fun and shred as hard as I can.

Favorite mountain range?
Can't play favorites. I get very nostalgic thinking about the Sierra Nevadas but there are too many rad mountains to claim any one range.

The working title for the book or movie about your life?
“Let the Riding Do the Talking."

Best moment filming with WME this year?
The northern lights were as strong as I've ever seen them on our last night in AK. We stayed up late and jammed to the Dead and watched the show.

How did Warren Miller the man influence your skiing/riding career?
He must be one of skiing's most influential people of all time. I can't imagine that any other skier has been able to reach as many people as he has. I am certain that without Warren, the sport would be different than it is today. I am also certain that his films influenced a lot of the people I was influenced by. Major impact…