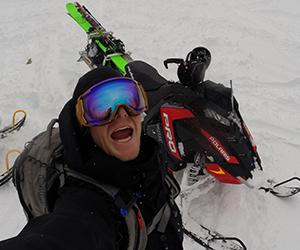 Sun Valley, Idaho native and once again local, freeskier Collin Collins throws down in the backcounty and the park. As an athelte for K2 Skis, Smith Optics, Saga, and Full Tilt, Collins has traveled deep into the backwoods of the Intermountain west cutting fresh tracks and building kickers to showcase his unique style.

Competitions like Orage Masters 8, Red Bull Cold Rush, and the FWT Canadian Freeskiing Championships have solidified Collins as a top freestyle skier. Outside of competitions Collins is somewhat of a pioneer in the Montana and Idaho backcountry with a healthy hunger for making first ascents and scouting downhill lines that others would balk at.

In January of 2014, he sustained a nasty injury (ACL, Medial and Lateral Meniscus tears and severe cartilage damage) at Big Sky, Montana sent him to the operating table. After intense rehab he was back to it at Mt. Hood in July 2016. And, it looked like he never took a day off.

When not competing, Collins' makes the most of his backyard in Sun Valley either backcountry skiing or taking his mountain bike down gritty terrain.