A Ski Trip to Greece

It's probably not at the top of your ski-destination wish list. But if you're looking for more than just snow - culture, tsipouro, and communion with the gods - it should be.

To be honest, I never thought I would go on a ski trip to Greece. To be even more honest, I never knew there was skiing in Greece. Well, despite its beachy reputation, and despite our trip’s many obstacles – a labor strike in the Frankfurt Airport, lost bags, a no-fly zone imposed by the government, bad weather – Greece was one of the most memorable ski destinations Tyler Ceccanti and I have ever experienced.

Our first objective was famed Mount Olympus. Snow-covered nine months of the year, it boasts some couloirs that accumulate 350 annual inches or more. There’s even a heli-ski op, Heliski Greece, that flies to the top. We hoped to ski the main and highest peak of Olympus, 9,570-foot Mytikas, or “Throne Zeus.” We could have seen the summit from our hotel rooms in Litohoro, situated right at the base, if it weren’t swathed in a thick, uninviting veil of clouds.

The day after we arrived, we walked from our hotel to the Aegean Sea, where we could better see whether Zeus, god of sky and thunder, would part the clouds on the peak from which he ruled. But day after day, for four days straight, he would not. We spent hours staring out at the water, wondering what could be lying at the bottom – weapons, boats, bones… Hundreds of naval battels have been fought on these waters.

On the fifth day, Hestia, the goddess of hospitality, convinced her little brother Zeus to part the veil, and the Throne emerged. But it also happened to be the day the government imposed a four-day no-fly zone, thanks to security concerns surrounding Greece’s meetings with the European Union. So we decided to cram and strap skis and film bags in and on our van and embark on a Grecian road trip, with our guide Pavlos leading the charge.

We headed to Vasilitsa, a ski area above the city of Greneva in northwestern Greece, a few hours away. After so much waiting around, our first turns and film shots were very rewarding. The resort closed around 3:30 p.m., but we hiked around until 7 p.m., trying to get in as much skiing as possible. When we finally hung it up for the day, we wandered into a chalet for our first round of tsipouro, a drink made from the residue of the wine press. The stuff would prove to be ubiquitous throughout our adventure. It seemed everyone had an uncle or a father who produced this very genuine Greek drink. The locals convinced us to stay, talk, and drink for a bit. A ski instructor we met explained to us, “Greece may not have the largest ski hills, but we have the best après.”

The next leg of our journey brought us to an ancient, untouched region called Zagori, through which runs the Pindus range – “the Spine of Greece.” There are nearly 50 villages hidden in these time-worn mountains. Some of them are more than 2,000 years old and made almost completely of stone. In the late 18th and early 19th centuries, with trade booming, inhabitants built bridges between the villages – 45 of them, according to locals – so merchants could travel and trade. This network made the region wealthy, which helped preserve its traditions during Turkish occupation. The inhabitants of Zagori agreed to pay the Turks taxes in exchange for certain privileges, which included administrative independence and a law banning Turks from crossing into the territory. It was the most remote and undisturbed part of Greece that we visited. 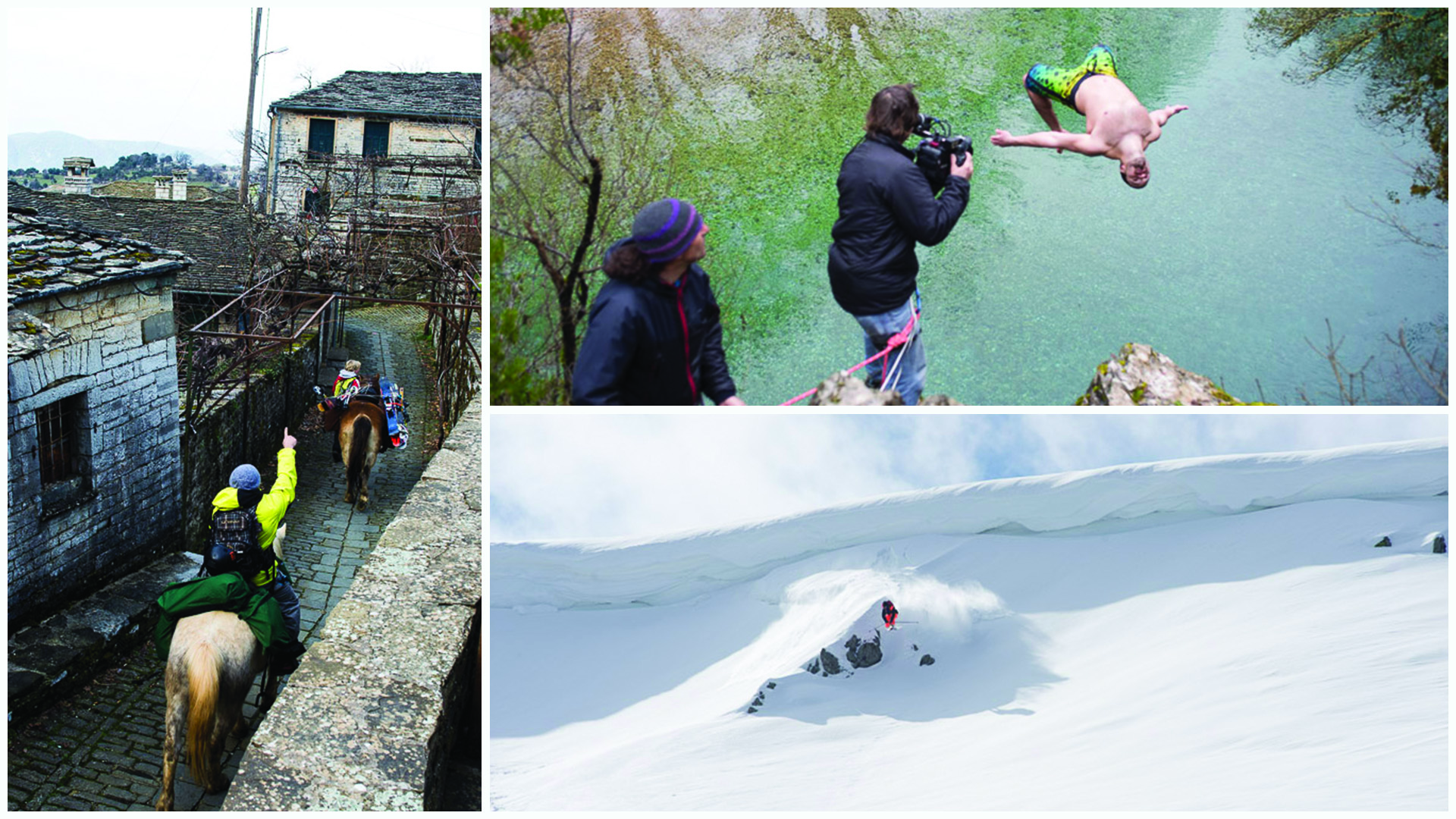 For the next two days, Papigo, a small village built into the side of a mountain, was our home. The plan was to travel by horseback, as the ancient Greeks did, to the highest mountains in the Pindus range. Once the horses took us to the snow line, we would ski-tour the rest of the way. Our friend Iraklis broke trail up one of his favorite chutes, helping Tyler and me save our energy for skiing. It was a big day for all of us, and when we got down, the family we were staying with was waiting for us with some well-deserved tsipouro.

The next day, we were on the move again. We didn’t make it far before Tyler saw something he needed to do: A near-freezing river, so crystal clear we could see right to the bottom, begged to be jumped into. Tyler scouted it to make sure it was deep enough, stripped down to his shorts, and… waited. In filming, there can be a lot of standing around and changing of camera angles, and in this case, it happened six or seven times. So Tyler stood atop a cliff over a river in northern Greece, dripping wet in the middle of winter, for well over an hour. He persevered, though, nailing the shot and a few back-up angles as well.

We continued to the small town of Kapesovo, where we stayed for one night before making our way back to Olympus. Kapesovo is situated on a very steep hill and is built of stone just like the other villages of the Zagori region. We walked to the local gift shop, where the woman who ran our hotel worked. With true Greek hospitality, she greeted us with tsipouro. “You’re not allowed to try just one,” she said, smiling, and displayed a dozen different flavors.

At this point, we’d traveled almost all the way across northern Greece. Then we got word that the government was about to open the no-fly zone. We packed up and headed back to Olympus, driving near Pella, birthplace of Alexander the Great. Alexander started on his epic conquest of the Mediterranean here, commanding 40,000 men who would march more than 20,000 miles. Legend has it that the campaign ended only because the troops, after 12 years of warring, were fed up and exhausted and wanted to return to their families back home in Macedonia. Sure makes you feel lucky to be cruising down the highway to the next town to go skiing. 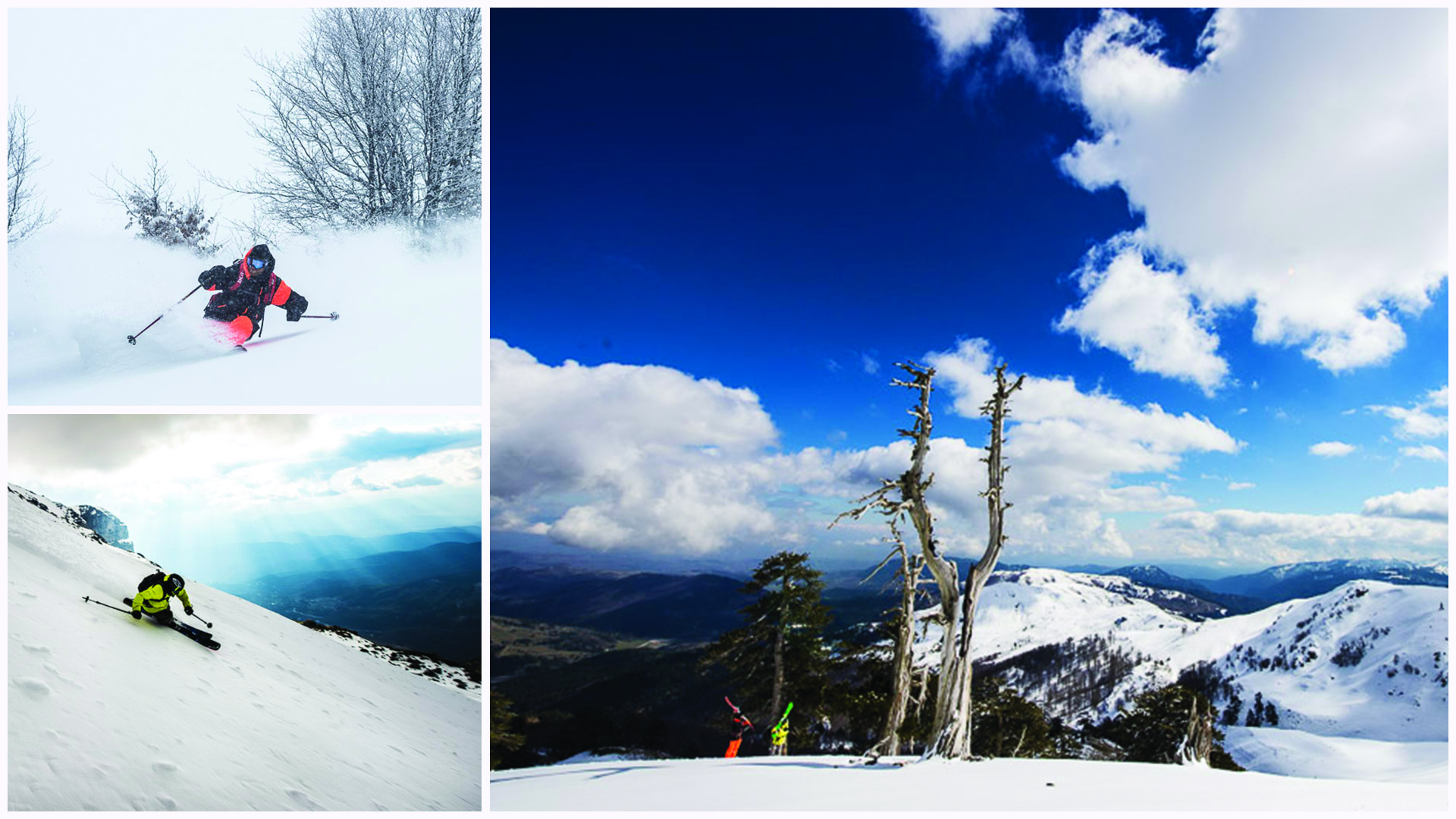 When we returned to the base of Mount Olympus, it seemed our deeper appreciation of Greece pleased Zeus, as the skier cleared. On our first flight up to the Throne, with help from Artemis, the goddess of the hunt, we tracked down our lines. With the help of Apollo, god of the sun, we received the light we needed to film them. But of course we knew that even the grace of the gods wouldn’t protect us from an avalanche here, where the long couloirs eventually turn into rivers, so if the snow slides, you have little chance of surviving.

We tested the snowpack in a bowl, and Tyler set off a large slide near a line I was about to ski. We were safe, but we knew we needed to be vigilant about the dangers of Mount Olympus.

Two more of these perfect days followed. We found chutes, couloirs, and cliffs, and we harvested the shoulder of the peak. Because of the high avalanche danger, we didn’t ski some of the longest couloirs. As our guide Pavlos said, “If you ski a couloir from the top of Mytikas and fall, you will fall to the sea.” Neither Tyler nor I was greatly interested in finding out what it was like to fall off a mountain into the sea.

In the end, the disappointing no-fly zone had actually forced us to explore Greece more deeply than we would have otherwise – its mountains, winding roads, old bridges, and, of course, tsipouro. We had the best guides and company we could have asked for. The gods, it seemed, ended up on our side for weather, pow hunting, hospitality, and, of course, celebration.