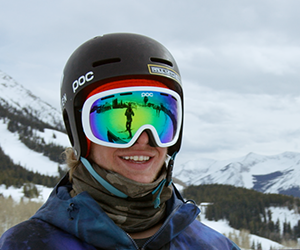 Hailing from Crested Butte, Colorado, Aaron Blunck has never had to wander far to find fresh powder and hone his skills on the halfpipe or in deep powder stash. At 20 years old, he's made a name for himself in the ski industry as an Olympian on the U.S. Half Pipe Team. Most recently, he took first place in the 2016 Park City U.S. Grand Prix Halfpipe competition and snagged 7th place at the 2014 Sochi Olympic Winter Games where he competed as the youngest male (17 at the time) to compete on the U.S. halfpipe team. Blunck comes from a long line or skiers and his family is somewhat of a legend in Crested Butte. Both his mother and grandfather were ski instructors and his grandfather is credited with creating the Crested Butte ski school.

When not on skis, Blunck is a fan of pick up soccer and games and shooting hoops with his friends.